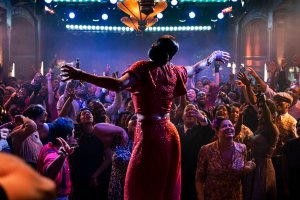 This image released by Hulu shows Andra Day in “The United States vs Billie Holiday.” (Takashi Seida/Hulu via AP)

Legendary jazz singer Billie Holiday became an early spark to the Civil Rights movement, and a target of persecution by the American government due to her haunting protest song “Strange Fruit,” which tells of a lynching in the South. Despite her sentence to a year and a day in prison, Holiday proved her resilience by ignoring orders to scrap the song from her performances and refusing to play the victim to the constant adversities that challenged her.

“The United States vs. Billie Holiday,” directed by Lee Daniels and written by Suzan-Lori Parks, depicts Holiday’s addiction, abuse, and persecution while managing to maintain her determination and power onscreen. The only missing piece to this puzzle is the legendary singer’s relationship to the music that defined her legacy.

Despite its quality production design and talented cast, the unfocused timelines and episodic-like structure causes the film to be messy, and teeter dangerously close to being boring. The only redeeming quality is the performance of singer-turned-actress, Andra Day.

Day reflects the gritty sides of Holiday’s career while maintaining the regal presence that fans from all generations knew her for. She absorbs the audience into the otherwise unfocused film by displaying the many facets of Holiday’s personality and background and bringing a fragile aspect of humanity to the character.

As suggested by the title, the driving force of the film is expected to be Holiday’s struggle against the head of the Federal Bureau of Narcotics, Harry Anslinger (Garrett Hedlund) as he uses her drug abuse as an excuse to extinguish her as a potential flame to the civil rights movement. However, Holiday’s speculative romance with undercover federal agent Jimmy Fletcher (Trevante Rhodes) takes center stage.

The on-screen chemistry between Day and Rhodes is undeniable, but the historically unconfirmed romance between Holiday and agent Fletcher as he follows her across the country appears as a distraction from the singer’s true adversaries. Although Billie Holiday’s life was defined by her defiance against the government oppression of Black people through her persistent performance of “Strange Fruit,” much of the two hours and 10 minutes run time is consumed by agent Fletcher’s pursuit of her as he follows her on tour, repeatedly visits her backstage, and even shoots up heroin with her to prove his allegiance. Meanwhile, Hedlund’s Anslinger is reduced to a character who merely looms in the shadows during Holiday’s concerts and periodically presses Fletcher to find evidence to justify the singer’s arrest.

Except for a chilling single-shot take of Day performing “Strange Fruit,” Holiday’s connection to her art is seemingly sidelined by the portrayal of repeated abusive relationships, troubling scenes of substance abuse, and hallucinative sequences. Additionally, her struggles with addiction and abuse are so prominent in the film that her primary battle versus the United States (as stated in the title) takes a backseat.

Nevertheless, Andra Day’s talent continues to bring strength to the biopic as she portrays Holiday’s courage—even to the end of her 44 years—in one final standoff against Anslinger, as he presses her to fold to his oppression. From her haunting replication of Holiday’s purring voice to the bare emotion she brings to the screen, Day’s magnetic performance stands as the film’s strongest suit.