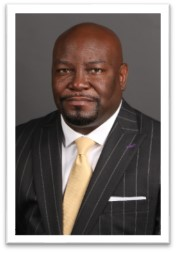 He began his career as a public safety patrol officer and rose through the ranks to Police Captain with the City of Hampton Police Department. His experience and assignments included working in and leading several departments such as Support Services and Special Projects, Homeland Security, Personnel and Recruitment, Internal Affairs, Patrol Operations, 911 Dispatch Center, Homicide, and VICE Narcotics. His background further includes eight years of military service with the North Carolina and Virginia Army National Guard as a military police officer.

Covington is a member of several professional organizations, including the National Organization of Black Law Enforcement Executives, International Association of Chiefs of Police, and Virginia Chapter of the FBI National Academy Associates. As a police captain and interim deputy chief of police, he has supervised and managed over 100 sworn public safety officers and civilian personnel. Additionally, he managed and assisted with the oversight of a $6 million administrative budget. He is a transformational leader with high emotional intelligence and situational awareness, with a proven track record of success in developing strategies and implementing policies.

Covington is a graduate of the FBI National Academy and has attended numerous law enforcement and professional development programs, including Executive Police Management, Internal Affairs, Crisis Intervention & Stress Management, Equal Employment Opportunity, Hostage Negotiation, Emergency Preparedness, Title IX, and Threat Assessment training. He earned a bachelor’s degree in criminal justice from Fayetteville State University, a master’s degree in human resources management from Troy State University, a certificate of executive leadership in criminal justice education from the University of Virginia, and is currently enrolled in a doctoral program in strategic leadership at Regent University.

Deputy Chief Covington considers his most significant achievement to be his family. He is married to Dr. Dana Covington, a physician and alumna of Norfolk State University, and has three daughters and one granddaughter.