SEOUL, South Korea (AP) — South Korea says the most powerful missile that North Korea tested this week missile is potentially capable of striking targets as far as 13,000 kilometers (8,100 miles), which would put Washington within reach.

The Defense Ministry says Friday further reviews are needed to determine whether the intercontinental ballistic missile’s warhead can survive atmospheric re-entry and accurately strike the target.

Many questions remain, but there’s broad agreement from government and outside analyses that the huge Hwasong-15 ICBM represents a significant step forward, putting the North extremely close to its goal of a viable arsenal of nuclear-tipped long-range missiles. 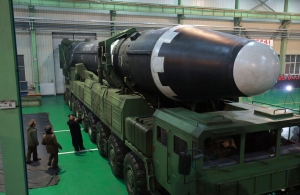