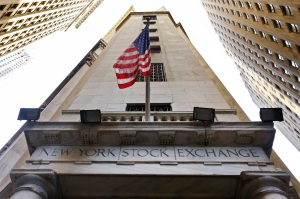 FILE – In this Friday, Nov. 13, 2015, file photo, the American flag flies above the Wall Street entrance to the New York Stock Exchange. Global stocks mostly rose Wednesday, Nov. 22, 2017, after Wall Street hit new highs and Hong Kong’s Hang Seng index closed above the 30,000 level for the first time in over 10 years. Trading was slowing, however, ahead of the two-day U.S. break for the Thanksgiving holiday. (AP Photo/Richard Drew, File)

NEW YORK (AP) — With the Thanksgiving holiday approaching, U.S. stocks are little changed Wednesday morning after they finished at all-time highs the day before. The price of oil is rising on reports OPEC might extend its cuts in production, and energy companies are also up. Technology companies are taking small losses as the two former halves of Hewlett-Packard both tumble.

All four major indexes closed at record highs Tuesday, led by gains for technology and health care companies, as well as industrial and basic materials stocks. U.S. markets will be closed Thursday for the Thanksgiving holiday and trading will end early on Friday.

ENERGY: Reuters reported that Saudi Arabia, the biggest oil exporter in the world, wants the OPEC cartel to extend this year’s cut in oil production for another nine months. The nations of OPEC, as well as other major oil producers including Russia, will meet in Vienna next week to discuss their goals. Benchmark U.S. crude rose 89 cents, or 1.6 percent, to $57.72 a barrel in New York, its highest price since the middle of 2015. Brent crude, used to price international oils, gained 46 cents to $63.03 a barrel in London.

HP HICCUP: The two main companies that once comprised Hewlett-Packard both slumped. Hewlett Packard Enterprise, which sells data-center hardware and tech gear, dropped 98 cents, or 6.9 percent, to $13.14 after the company said Meg Whitman will retire as CEO. President Antonio Neri will replace Whitman on Feb. 1. She became CEO of Hewlett-Packard in 2011 and oversaw its split in 2015. Meanwhile HP Inc., which sells PCs and printers, had a solid quarter but couldn’t sustain the gains it’s made this year. The stock lost $1.19, or 5.3 percent, to $21.27. It’s up more than 40 percent in 2017.

STILL NO: Industrial equipment and software maker Rockwell Automation said it rejected another offer from Emerson Electric. Rockwell said the third bid was still too low and not in the best interest of the company. Emerson offered to buy Rockwell for $200 a share in August, raised it in October, and then bumped its bid to $225 a share, or about $29 billion, last week. Emerson rose $1.65, or 2.7 percent, to $61.97 and Rockwell fell $1.18, or 0.6 percent, to $191.84.

PAINT BY NUMBERS: Axalta Coating Systems climbed after it ended talks with one potential suitor but said it is talking to Nippon Paint about a possible sale. Axalta entered into talks with Dutch company AkzoNobel recently, but it said Wednesday that those discussions have ended. Axalta rose $1.48, or 4.4 percent, to $35.35.