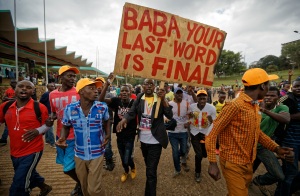 Supporters of opposition leader Raila Odinga march with a placard referring to him as “Baba”, the Swahili word of respect meaning “Father”, as they start to hold a rally in Uhuru Park in downtown Nairobi, Kenya Wednesday, Oct. 25, 2017. The chief justice of Kenya’s Supreme Court says the court cannot hear a last-minute petition to postpone Thursday’s presidential election because it does not have a quorum of judges. (AP Photo/Ben Curtis)

Who knows? Opposition leader Raila Odinga, whose legal challenge claiming vote-rigging led to this new election, has said he won’t take part on Thursday because electoral reforms have not been made. Now he vows to turn his political coalition into a “resistance movement.” But the electoral commission has said Odinga will be on the ballot because he didn’t turn in a formal withdrawal form. This year’s election had been seen as the last attempt at the presidency by the 72-year-old son of Kenya’s first vice president.

President Uhuru Kenyatta, who called the Supreme Court justices “crooks” after they nullified his re-election, has insisted that Thursday’s vote will go ahead. The son of Kenya’s first president is on the ballot along with all other candidates who ran in August, the electoral commission has said. The 55-year-old Kenyatta wants to avoid becoming the first Kenyan president not to win re-election.

No other candidate in August won even 1 percent of the vote.

WILL THERE BE VIOLENCE?

Kenya has seen deadly post-election violence in the past, notably after the disputed vote of 2007 when more than 1,000 people were killed. Officials in the nation of 44 million people have said the country has learned the lessons of the past and that such bloodshed will be avoided now.

Still, dozens have died since the August vote. Human Rights Watch and Amnesty International say police have killed at least 67 opposition supporters since the election results were announced. Meanwhile, Kenyatta supporters accuse the opposition of attacking preparations for Thursday’s vote in some areas.

The driver for the Supreme Court’s deputy chief justice was shot and wounded hours before the court was to consider a last-minute petition by activists to delay Thursday’s vote. The shooting raised concerns about intimidation and recalled the murder shortly before the August vote of the electoral commission official responsible for the electronic voting system.

Kenya remains largely ethnically divided, with many voters seeing Kenyatta as the candidate of the Kikuyu people, the country’s largest ethnic group, and Odinga representing the Luo, who have never produced a head of state.