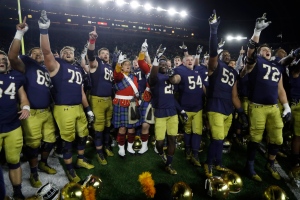 A week after a rash of upsets gave the poll a shake-up, the first eight teams in the Top 25 released Sunday were unchanged. Alabama remains a unanimous No. 1 in the media poll, with 61 first-place votes. Penn State is No. 2 and Georgia, which was idle, is No. 3.

Undefeated TCU and Wisconsin round out the top five.

The Fighting Irish have slowly made their way up the rankings this season, jumping in briefly, falling out and then climbing steadily from 22 to 21 to 16 to 13. This is the 32nd time in seven-plus seasons under coach Brian Kelly that Notre Dame has appeared in the top 10 of the AP poll.

In 13 seasons under previous coaches Bob Davie, Tyrone Willingham and Charlie Weis, the Irish were ranked in the top 10 32 times.

THIS WEEK IN ‘BAMA

With seven more polls left this season, including the final one after the College Football Playoff national championship, Alabama can tie the Buckeyes basically by winning out.

Michigan moved into the Top 25 on Sept. 27, 2015, after the fourth game of Jim Harbaugh’s tenure as coach and had been there ever since. But after the Wolverines’ second loss in three games, sandwiched between an overtime win over Indiana, they landed second among the others receiving votes this week.

Michigan was the only team to slip out of the rankings, making room for Iowa State.

The surprising Cyclones (5-2) are No. 25, their first appearance in the AP poll since September 2005, when they were briefly near the bottom of the Top 25.

Iowa State pulled off a stunner earlier this month, beating Oklahoma in Norman, and have not lost since. The Cyclones third straight victory came Saturday at Texas Tech, where they beat the Red Raiders 31-13.

USC dropped 10 spots to No. 21 after its second loss of the season. The Trojans entered the season as a top-five team and the Pac-12 favorites. USC is still in first place in the Pac-12 South, with control of its path to the conference title game, but their playoff hopes are pretty much shot.

No. 2 Penn State at No. 6 Ohio State. The Buckeyes are the Big Ten team looking for revenge this week.

No. 4 TCU at No. 25 Iowa State. Didn’t quite see this as major hurdle for a playoff contender last month, but here we are.

No. 14 North Carolina State at No. 9 Notre Dame. Major playoff implications for two teams that started the season unranked.

No. 11 Oklahoma State at No. 23 West Virginia. Two of the teams in a four-way tie for second in the Big 12 race, one game behind TCU.