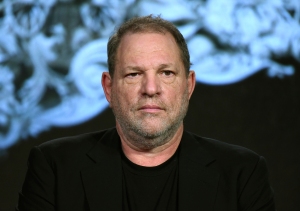 FILE – In this Jan. 6, 2016, file photo, producer Harvey Weinstein participates in a panel at the A&E 2016 Winter TCA in Pasadena, Calif. The Weinstein Co., mired in a sex scandal, may be putting itself up for sale. The company said Monday, Oct. 16, 2017, that it is getting an immediate cash infusion from Colony Capital and is in negotiations for the potential sale of all or a significant portion of the movie studio responsible for films like “Shakespeare in Love,” and “Gangs of New York.” (Photo by Richard Shotwell/Invision/AP, File)

NEW YORK (AP) — The Weinstein Co., mired in a sex scandal, may be putting itself up for sale.

The company said Monday that it will receive an immediate cash infusion from Colony Capital and is in negotiations for the potential sale of all or a significant portion of the company responsible for producing films such as “Django Unchained,” ”The Hateful Eight” and “Lion.”

The fallout has been swift after Weinstein issued a lengthy and seemingly tone-deaf apology. The Academy of Motion Picture Arts and Sciences has revoked his membership as has the British Academy of Film and Television Arts.

Amazon Studios, the growing film arm of Amazon, cut ties with the Weinstein company last week. Showtime has threatened to pull out of an Oliver Stone drama in development, “Guantanamo,” because Weinstein Co. is a producer.

Law enforcement in the U.S. and Europe are taking a new look at past allegations.

Word of a potential sale comes just three days after Bob Weinstein, Harvey’s brother, said that selling the company was not an option.

“We are pleased to invest in The Weinstein Company and to help it move forward,” Colony said Monday. “We will help return the company to its rightful iconic position in the independent film and television industry.”

The list of women alleging harassment and assault by Harvey Weinstein continues to grow. More than 30 women, including actresses Angelina Jolie, Ashley Judd and Gwyneth Paltrow — have spoken out.