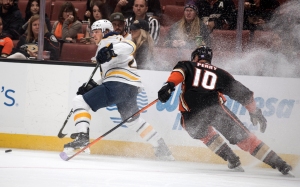 ANAHEIM, Calif. (AP) — Phil Housley finally got win No. 1 with the Buffalo Sabres.

Chad Johnson made 25 saves, Benoit Pouliot scored the go-ahead goal in the second period and the Sabres beat the Anaheim Ducks 3-1 on Sunday night for Housley’s first victory as an NHL coach.

“It feels great, obviously,” Housley said. “But I have to tip my hat to the guys in that locker room.”

Justin Bailey and Johan Larsson also scored for Buffalo, which had lost five straight to open Housley’s first season. The Sabres were pumped for their new boss.

“We haven’t been playing our best hockey,” defenseman Jake McCabe said. “He’s been patient with us. … Hopefully it’s the first (win) of many.”

Bailey scored 1:26 into his first regular-season game. Goalie John Gibson made the initial save on a shot by Larsson but couldn’t cover the puck. Bailey swooped in as Gibson dove across the crease during a scramble and sent a backhand shot under the goalie’s chest.

“The play was pretty simple,” said Bailey. “I came off the bench and brought pucks to the net which caused a little bit of confusion and I was fortunate enough to be at the right place at the right time and put that in.”

Gibson started despite leaving after the first period against Colorado on Friday with an upper-body injury.

The Ducks have scored first only once in six games this season. Playing from behind is something the team has become familiar with.

“You never draw it up that way, but stuff happens,” Gibson said. “We usually come back. You find ways. We just haven’t found it yet.”

Midway through the second period, Evander Kane slashed Gibson while the goaltender was playing the puck behind the net.

The Ducks have yet to score a power-play goal this season. The team’s best opportunity came when a scrum in the crease led to Anaheim forward Derek Grant being bumped inside the goal, along with the puck. Officials whistled the play dead after the puck had crossed the goal line. A video review was initiated, and it was determined there was no goal because the referee was in the process of blowing his whistle when the puck crossed the line.

Late in the second period, Corey Perry’s slashing penalty put Buffalo on the power play for the third time. The Sabres had 13 seconds remaining with the extra man when Chris Wagner got in behind Kane and Rasmus Ristolainen. The forward deked twice and beat Johnson to tie it.

Buffalo has given up a league-high five short-handed goals through six games this season.

With 31.3 seconds left in the second, Josh Manson turned the puck over to Pouliot. Pouliot haphazardly got the puck to the front of the Ducks net, where it bounced off the skate of Cam Fowler and past Gibson to put Buffalo up 2-1.

The Ducks controlled a majority of the play in the third, but could not get the tying goal behind Johnson.

Larsson iced the game at 3-1 with an empty-net goal.

Fowler retrieved the puck from the back of the net and fired it against the side boards in frustration.

“We haven’t been able to put together 60 minutes,” Ducks coach Randy Carlyle said. “You can tell we’re starting to squeeze the sticks. Loose pucks up for grabs, instead of calmly making a play or corralling the puck, we’re slapping it away and throwing it away from ourselves.

“Usually that’s a sign of confidence. That’s the one thing we have to try and correct.”

NOTES: Ryan Getzlaf and Patrick Eaves were out of the lineup again for Anaheim after re-aggravating injuries from training camp. … Buffalo F Kyle Okposo did not play for the second consecutive game due to an illness. … Fowler played in his 500 NHL game, all with the Ducks. At 25, Fowler is the youngest Ducks player in franchise history to reach the 500-game mark.