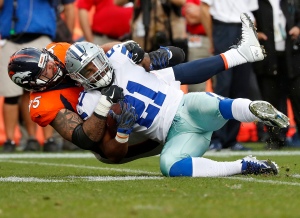 Dallas Cowboys running back Ezekiel Elliott (21) is tackled by Denver Broncos cornerback Chris Harris during the second half of an NFL football game, Sunday, Sept. 17, 2017, in Denver. (AP Photo/Jack Dempsey)

DENVER (AP) — Aqib Talib’s 103-yard interception return for a touchdown with 53 seconds left was the final indignity for the Cowboys in the Denver Broncos’ 42-17 blowout of Dallas and its vaunted offense on Sunday.

Sort of like Denver’s defensive dominance of Dallas and its vaunted offense.

Ezekiel Elliott had the worst game of his career with nine carries for 8 yards, Dallas managed just 40 yards rushing and one first down on the ground. The Cowboys (1-1) went 3-for-14 on third downs and failed three times on fourth down, looking nothing like the team that dominated the Giants in their opener.

“I want to emphasize today, this is not what we’re about in my view,” Cowboys owner Jerry Jones said. “I feel strongly about that. On the other hand, this is what Denver is about.”

The only big blemish in Denver’s fifth straight 2-0 start was the apparently serious injury to their top draft pick, left tackle Garett Bolles, who left the stadium on crutches and with a boot on his left foot after getting hurt in the third quarter.

With the stadium still rocking in the final minute, Talib stepped in front of Dez Bryant, who had earlier beaten him for a TD, snared Dak Prescott’s fourth-down pass and raced up the Dallas’ dejected sideline.

He slipped Cole Beasley’s tackle and followed linebacker Brandon Marshall’s beautiful block of Prescott into the south end zone, where he jumped into the stands, exhausted by enjoying every last bit of what he called “an all-around complete ballgame from the Broncos.”

Trevor Siemian tied a career high with four touchdown passes in a game that included an hour-long lightning delay that did nothing to slow Denver’s rolling offense.

“We knew they were sound in the secondary,” Jones said. “We were a little taken aback by how well they did offensively. “They seemed to really have our number. There’s no excuses here. Their quarterback played outstanding.”

Elliott, who’s playing while his appeal of a six-game suspension for domestic violence works its way through the courts, came into the game averaging 108 yards rushing per game and more than 5 yards a carry in his career.

“We just were getting dominated up front,” said Elliott, whose previous worst game was a 51-yarder in his NFL debut against the Giants last year. “We couldn’t get any movement off the ball.”

The star in the backfield on this day was C.J. Anderson, who rushed for 118 yards and a score and also caught a TD pass.

Thanks in part to Von Miller, who had two sacks, the Cowboys lost for the sixth straight time to the Broncos.

Siemian threw scoring strikes of 10 and 6 yards to Emmanuel Sanders as the Broncos built a 21-10 halftime lead. The Cowboys were lucky to be that close after a first half in which they managed just five first downs, converted one third down and were outgained 246 yards to 97.

The only touchdown for Dallas came on a 3-yard drive after DeMarcus Lawrence’s strip sack of Siemian after beating right tackle Menelik Watson. Bryant beat Talib for the score two plays after Maliek Collins scooped up the loose ball at the Denver 3.

SUSPECT SECONDARY: The Cowboys began the day without their top cornerback, Orlando Scandrick, who broke his left hand last week, and they lost rookie Chidobe Awuzie (hamstring) and Nolan Carroll (concussion) in the first half.

Denver scored on its first drive when Siemian found Sanders for a 10-yard strike , and the Broncos were driving for another score but Brandon McManus pushed a 49-yarder wide right, his second miss in three attempts since signing his contract extension Monday.

LIGHTNING DELAY : The game was delayed by lightning for 62 minutes in the first quarter. The Cowboys were at midfield with 33 seconds left in the first quarter when the teams were told to head to their locker rooms and fans retreated to the concourses.

Broncos coach Vance Joseph said they turned off the air conditioning and turned on the TVs to watch some football during the delay.

Miller joked that they spent it dancing and playing games.

“Connect Four, we had some peanut butter and jelly sandwiches,” Miller said. “We had a couple of rock-paper-scissors in there, turned on the music for a dance contest. … Just came in, danced around.”

Actually, Miller didn’t even do any of his usual dances after his sacks, but he did raise his arms after ending his career-high five-game sackless streak, which came after he’d been flagged twice for jumping offside.

“You think he was getting antsy?” Joseph said.

SPLIT ALLEGIANCES : DeMarcus Ware was the honorary alumni captain for the coin toss between the game pitting his former teams. He said he was thrilled to have played for both teams, but would always root for Miller.

Ware retired in January after nine years in Dallas and three seasons in Denver because of chronic back problems. He acknowledged he considered coming out of retirement when Broncos linebacker Shane Ray injured a wrist early in training camp but decided to stick with his new gig working for the NFL Network.