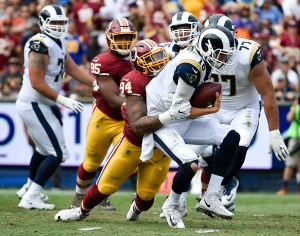 LOS ANGELES (AP) — Even Kirk Cousins was OK with how much the Washington Redskins ran the ball in a 27-20 victory against their former offensive coordinator, Sean McVay, and the Los Angeles Rams.

The Redskins (1-1) rushed 39 times for 229 yards, including touchdown runs of 71 and 7 yards by Chris Thompson on Sunday.

The game-winner came when Cousins threw an 11-yard touchdown pass to Ryan Grant with 1:49 to play. Even that 70-yard drive featured smash-mouth running, with seven runs by Samaje Perine.

“It’s always good to make plays in the passing game,” Cousins said. “But make no mistake, it’s always nice to hand off to Chris Thompson and watch him just go 50, 60 yards for a touchdown. So I’ve got no complaints, either.”

Washington ran the ball seven straight times on a drive capped by Thompson’s 7-yard run for a 10-0 lead.

“I don’t know how many times that happens in a season where you have an entire drive of running the ball,” Cousins said. “You have to credit the offensive line.”

That was a common theme for the Redskins, who held the ball for nearly 13 minutes more than the Rams did.

Guard Brandon Scherff said the Redskins could sense the Rams (1-1) were wearing down.

Coach Jay Gruden “asked us what we wanted to do and we said, ‘Run the ball,” Scherff said.

Here are some nuggets from the game:

MOMENTUM: “We definitely needed this,” Thompson said. “It was big for us to finally get going. We had a rough preseason running the ball. Last week was rough also. So to be able to go out there and get over 200 yards rushing was great. Now it’s on us. We’ve got to continue to keep it going.”

Late in the second half, on second-and-6 from the Washington 39, Thompson took a delayed handoff from Cousins out of the shotgun and burst through the defense for his long TD run and a 20-10 lead.

McVAY: The 31-year-old worked for the Redskins for seven seasons, including the last three as offensive coordinator under Gruden, before being hired by the Rams as the youngest head coach in modern league history.

Despite McVay’s familiarity with the Redskins, it didn’t translate into a win for the Rams (1-1).

“We continued to fight back, but we can’t hurt ourselves with the penalties, some of the different things that occurred throughout the course of the game,” McVay said.

TODD GURLEY: The Rams, who didn’t look near as sharp as they did in routing Indianapolis a week earlier, made a game of it, thanks to a spectacular play by the running back.

Midway through the third quarter, Gurley caught a swing pass from Goff, hurdled cornerback Bashaud Breeland and then reached for the pylon to complete the 18-yard play and pull the Rams to 20-17.

Gurley also scored on a 1-yard run midway through the third quarter. His fumble helped set up a 22-yard field goal by Washington’s Dustin Hopkins in the second quarter.

The Rams had tied the game at 20 on Greg Zuerlein’s 40-yard field goal with 7:16 to play. It was set up on a trick play, when punter Johnny Hekker completed a 28-yard pass to Josh Reynolds to the Washington 17. But two penalties stalled the drive and the Rams had to settle for the field goal.

After Grant’s score, Mason Foster sealed the win with 1:37 to go by intercepting Jared Goff.

Cousins had a much better day than in a season-opening loss to Philadelphia, when he had three turnovers. He completed 18 of 27 passes for 179 yards and one touchdown, with no interceptions. L.A.’s Jared Goff was 15 of 25 for 224 and one touchdown. After Grant’s score, Mason Foster sealed the win with 1:37 to go by intercepting Goff.