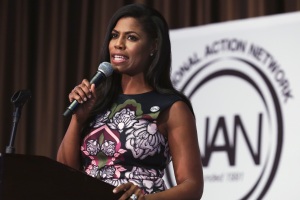 FILE – In this April 27, 2017 file photo, Omarosa Manigault-Newman, political aide and communications director for the Office of Public Liaison at the White House under President Donald Trump’s administration, speaks at the Women’s Power Luncheon of the 2017 National Action Network convention, in New York. Manigault Newman, an assistant to President Donald Trump, says a mid-September conference has been moved to the White House campus from a hotel in the Virginia suburbs of Washington. (AP Photo/Richard Drew, File)

WASHINGTON (AP) — A mid-September conference on historically black colleges and universities remains on track, the White House said Wednesday, despite reports that it has been postponed.
Omarosa Manigault Newman, an assistant to President Donald Trump and communications director for the White House Office of Public Liaison, said the summit has been moved to the White House campus from a hotel in the Virginia suburbs of Washington.
The conference is planned for Sept. 17-19, with the bulk of the work scheduled for Sept. 18, she said.
Some organizations and lawmakers had called on the White House to scrap the conference after Trump blamed “both sides” for violence between white supremacists and their opponents during clashes last month in Charlottesville, Virginia, where one woman was killed.
White House press secretary Sarah Huckabee Sanders said late last month that conference registration was at capacity and the White House had no intention of canceling.
The Thurgood Marshall College Fund cast doubt on the gathering when it released a statement last week saying it supported a decision by Education Secretary Betsy DeVos to postpone the National HBCU Week Conference. Published reports described the conference as having been postponed. DeVos’ statement mentioned modifying the conference, not postponing it.
Manigault Newman told The Associated Press in a telephone interview Wednesday that the conference has just been scaled back, not eliminated. She said the White House plans to announce an executive director for its initiative on black colleges on Sept. 18.
Trump signed an executive order in February that established a White House initiative to promote excellence and innovation at these schools, which were founded at a time when predominantly white institutions of higher learning would not allow blacks to enroll.
Trump’s directive moved the Initiative on Historically Black Colleges and Universities from the Education Department to the White House.
It directs the initiative to work with the private sector to strengthen the fiscal stability of HBCUs, make infrastructure improvements, provide job opportunities for students, collaborate with secondary schools to create a college pipeline and increase access and opportunity for federal grants and contracts. It does not specify how much federal money the colleges should receive.
Black college presidents are seeking billions in federal funding for infrastructure, college readiness, financial aid and other priorities. Under President Barack Obama, historically black colleges and universities received $4 billion over seven years.