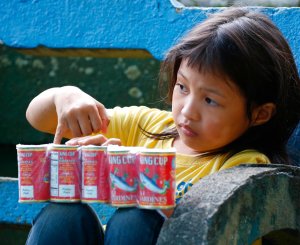 A displaced resident holds a supply of sardines at an evacuation center in Balo-i township, Lanao del Norte province in southern Philippines, Wednesday, May 31, 2017. Tens of thousands of residents are now housed in different evacuation centers as government troops continue to fight Muslim militants in Marawi city. (AP Photo/Bullit Marquez)

MARAWI, Philippines (AP) — There was food and water— welcome commodities amid the frequent tears. There was, finally, safety, at least for the moment. And there were stories — stories of things that mothers and fathers hope never happen to their families.

At an evacuation center outside the besieged Philippine city of Marawi on Wednesday, the results of a week of misery — a week of violence and uncertainty and long nights and promises of better tomorrows — were evident in the faces and hearts of the displaced.

“When you’re desperate, you will do everything to survive,” said Zia Alonto Adiong, a regional lawmaker who welcomed dozens of people, including children, who fled to safety after more than a week trapped inside Marawi.

About 130 people have been killed in the violence, which erupted last Tuesday after soldiers launched a raid to capture militant leader Isnilon Hapilon, who has been designated leader of the Islamic State group’s Southeast Asia branch.

But the operation went awry and Hapilon got away. Fighters loyal to him surprised government forces with their firepower, fending off air strikes and house-to-house searches.

The unrest has boosted fears that the Islamic State group’s violent ideology is gaining a foothold in the country’s restive southern islands, where a Muslim separatist rebellion has raged for decades.

“We believe he is still there, and we believe that is why they are putting up a very stiff resistance in the areas that they are still being held up and being cleared,” Padilla told reporters in Manila, the capital.

As the two sides battle it out, civilians have been caught in the crossfire.

Bilal Sulaiman, a 47-year-old carpenter, said his wife and three children evacuated to safety early in the conflict but he stayed behind to watch their house near the scene of the battle.

He said when the fighting became too fierce, with bombs exploding two blocks away from his house, he ran for his life to a nearby mountain, where he waited without food and water until he decided to swim across a pond to safety.

He waited in an army-controlled area and was retrieved by government rescuers Wednesday.

“We did not eat for days,” Sulaiman told the AP at an evacuation center where some people wept as rescue workers handed out biscuits and water.

“It was really scary, there were explosions just two blocks from my house but I couldn’t leave our house because somebody might burn it. I later left when the fighting got too intense.”

Frightened civilians crowded into schools, basketball courts and sports centers. Villagers slept on floors and in grandstands and relied on government food and water rations and donations.

Amid the squalor and lack of privacy, Naima Dimangadap wept.

“Our homes got burned because of the bombings. We failed to save anything, including our cooking pots. It’s so difficult to live in this evacuation camp,” said Dimangadap, a single mother of five.

Padilla said 960 civilians had been rescued and an estimated 1,000 residents remained trapped in the city. The dead include 89 militants, 19 civilians and 21 government forces, Padilla said.

President Rodrigo Duterte, who declared martial law on Mindanao island, has approved the creation of a “peace corridor” to hasten the rescue of civilians and delivery of humanitarian aid for displaced people, said presidential spokesman Ernesto Abella.

He said the corridor will be implemented by the government and the main separatist group, the Moro Islamic Liberation Front, which has signed a peace agreement in exchange for Muslim autonomy in Mindanao, the southern third of the Philippines.