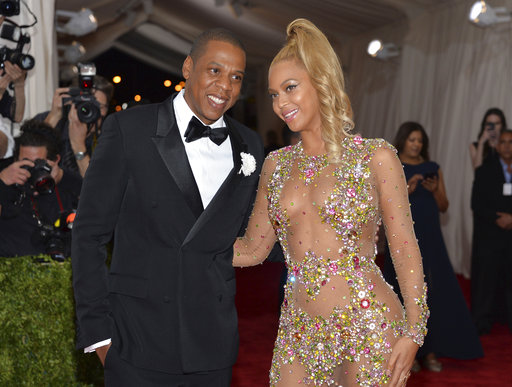 File – In this May 4, 2015, file photo, Jay Z, left, and Beyonce arrive at The Metropolitan Museum of Art’s Costume Institute benefit gala celebrating “China: Through the Looking Glass” in New York. Country music power couple Faith Hill and Tim McGraw talk about what they admire about other musical couples, from Beyonce and Jay Z to Garth Brooks and Trisha Yearwood. “The truth is, I want to be Beyonce every single freaking night of my life,” Hill said. (Photo by Evan Agostini/Invision/AP, File)

LAS VEGAS (AP) — Faith Hill and Tim McGraw, who embarked on their third Soul2Soul tour last week, talk about what they admire about other musician couples both inside country music and outside the genre.

Although this royal couple has only toured once together, the On the Run Tour in 2014 was a cinematic event. Beyonce and Jay Z teased the tour with a Bonnie and Clyde-inspired trailer and highlights from the tour ended up on HBO as a special. “The truth is, I want to be Beyonce every single freaking night of my life,” Hill said. “So I go out there thinking, ‘I am Beyonce!'”

The couple has been singing together for longer than they have been married. Yearwood was a backup singer on Brooks’ “No Fences” album and she was the opener on his first headlining tour. Married in 2005, they have been touring together on the Garth Brooks World Tour since 2014. McGraw broke out in the ’90s thanks in part to Brooks bringing country music to a much wider audience. “We all came here at the same time, but Garth is Garth and nobody can be Garth,” McGraw said. “He opened the door for a lot of us.”

FAITH EVANS and THE NOTORIOUS B.I.G

— Earlier this year CNN accidentally tweeted a headline with the wrong singer named Faith on a news item about Evans releasing a duet album with her late rapper husband, whose real name is Christopher Wallace. Fans on Twitter were quick to poke fun at the mistake, but Hill responded enthusiastically: “This sounds awesome!” Evans responded on Twitter with a suggestion: “Up for a bonus duet, Ms. Hill?”

These two sweethearts put the love back in holiday season with their annual Christmas shows they’ve been doing for more than a dozen years that highlight Grant’s contemporary Christian hits and Gill’s premier guitar chops. “She is an incredible woman,” Hill said of Grant, while Vince “is one of the most respected people in the business.”

Copyright 2017 The Associated Press. All rights reserved. This material may not be published, broadcast, rewritten or redistributed.