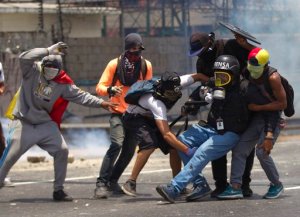 Demonstrators help a journalist who was injured in a leg while covering clashes between demonstrators and the Bolivarian National Guard during a protest in Caracas, Venezuela, Monday, April 10, 2017. Opponents of President Nicolas Maduro protested on the streets of the capital as part of an ongoing protest movement that shows little sign of losing steam. (AP Photo/Ariana Cubillos)

Demonstrators covered their faces to protect against the plumes of tear gas that wafted through the streets of Caracas. A few threw rocks as they tried to make their way downtown waving Venezuelan flags and carrying signs decrying President Nicolas Maduro.

“We need to get out on the street and fight, to tell these people we don’t want them,” said Maria Guedez, a 67-year-old homemaker carrying a sign that read, “No more dictatorship.”

Now in their second week, the protests initially erupted April 1 after the Supreme Court stripped congress of its last vestiges of power, a decision it later reversed. Demonstrators and opposition leaders are angered at what they see as a government that no longer respects democratic institutions and is sliding toward authoritarianism.

Authorities squashed an opposition campaign to hold a recall referendum on Maduro last year, and a date has yet to be set for gubernatorial elections that were supposed to take place in 2016.

Maduro accuses the opposition of fomenting unrest and conspiring with international actors to destabilize the country. He was in Cuba on Monday for a gathering of the Bolivarian Alliance, a leftist coalition of 11 Latin American nations.

On Sunday the president called on the opposition to return to stymied efforts at dialogue and said he was eager for regional elections to take place. But opposition leaders renewed calls to take to the streets, saying Maduro’s words have no credibility until a full election timeline has been formally established.

“That’s the only way there will be peace in Venezuela,” said Julio Borges, president of the National Assembly.

Socialist party leader Diosdado Cabello said on Twitter opposition members who “use violence and terrorism to impose (themselves) on the majority who want peace” should face the consequences of the law.

“Enough with impunity,” he wrote.

Monday’s protest took place at the start of Easter Week, when many Venezuelans typically spend quiet time at home with family or go on vacation. Opposition party leaders urged people to put any beach plans on hold and instead get some sun while out putting pressure on the government.

In some previous demonstrations, government groups have roughed up several opposition leaders and fired rubber bullets and a previously unseen reddish gas at crowds. One day a small group of young protesters unsuccessfully tried to set fire to a Supreme Court office, and another group snatched a camera from journalists working for pro-government state broadcaster VTV.

A dozen people were injured in the protest Monday, and opposition leaders shared a video they said showed an infant being whisked away after being overcome by tear gas. Opposition members also distributed a picture of an expired tear gas canister they said was found detonated at a previous demonstration.

Expired tear gas chemicals and solvents inside a cartridge could potentially react with each other or oxygen in the area and degrade, forming highly toxic gases, said Sven-Eric Jordt, a professor at Duke University School of Medicine. A degraded pyrotechnic charge propelling the cartridge could also lead to uncontrolled explosions, he said.

Overall, the unrest has left one person dead and more than 100 detained. Eighteen people were detained Monday, and Venezuela’s Interior Minister Nestor Reverol said officers would continue to be deployed around the country.

“The Bolivarian government stands by its commitment to guarantee the tranquility and social wellbeing of our people,” he said in announcing the detentions.

International leaders and the Organization for American States have been ratcheting up pressure on Venezuela to hold general elections, a call Maduro and his allies have condemned as an unjust attempt to intervene in the Andean nation’s domestic affairs.

On Friday, two-time presidential candidate Henrique Capriles was barred from running for public office for 15 years amid an intense campaign waged by the government tying him to the protest movement that has grown into the most contentious since a wave of unrest in 2014.

“We urge demonstrators to express themselves non-violently and call on government security forces to protect peaceful protest, not prevent it,” a U.S. State Department spokesman said Monday.

Popular singer Miguel Ignacio Mendoza, known as Nacho, was among those affected by tear gas in Caracas Monday.

“The repression is not an invention of the media,” he said, his eyes irritated by the gas. “I’m here to prove it”