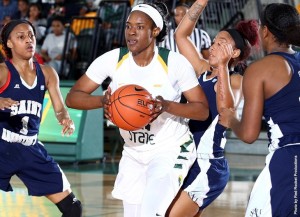 After a tightly-contested first 20 minutes of action, the Spartans surrendered a halftime lead for just the fourth time all season. Howard (14-12, 10-4) outscored the Spartans by five points in each of the final two quarters, securing the victory and sending NSU to its third straight loss – its longest losing streak of the year.

The Lady Bison grabbed the lead at 36-35 on a layup by Sydni Johnson with 4:36 remaining in the third quarter and would not relinquish it the rest of the way. The teams traded buckets for the rest of the period and Howard led 46-43 heading to the final stanza.

Norfolk State went cold from the floor in the final 10 minutes, which allowed the Lady Bison to increase their lead. Howard netted 12 of the first 16 points of the fourth quarter and saw its largest lead of the day at 11 when Heslip drained a triple from the top of the key to make the score 58-47 with 4:20 remaining in regulation.

However, the Spartans would fight back in their final home game of the season, and cut the deficit to 64-59 with 38 seconds remaining. However, Sarah Edmond and Heslip converted two shots each at the charity stripe to ice the game away as Norfolk State missed its final three shots from the field.

In the opening 20 minutes of the game, both teams matched the other shot for shot and neither team had a larger lead than four points. Howard led 11-7 when Heslip made a jumper at the 4:45 mark of the first quarter. NSU would rally and grab a 20-16 lead when Jordan Strode nailed a 3-pointer from the right wing with 6:26 remaining in the half.

After allowing the Lady Bison to take a 25-23 lead on a triple from Heslip with 3:43 left, the Spartans scored the next six points. They led 29-25 with just under a minute to go in the half, when Strode scored a layup on a fast-break. Ayonna Williams netted the final bucket of the half with 12 seconds left and the Spartans took a 29-27 lead into the locker room.

Consequently, Norfolk State fell into a fourth-place tie in the Mid-Eastern Athletic Conference standings with Florida A&M, half a game behind Hampton. The Spartans can finish as high as third in the final standing or as low as eighth, depending on what happens over the remainder of the regular season. The top three teams at the end of the regular season will secure a first-round bye in the upcoming tournament.

Norfolk State travels to Hampton on Monday at 6 p.m. for the Spartans’ final regular-season game.