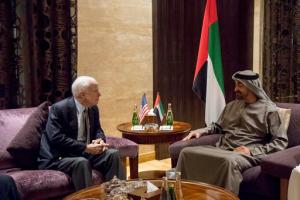 WASHINGTON (AP) — Sen. John McCain, one of President Donald Trump’s harshest critics, made a secret trip to northern Syria to visit U.S. forces stationed there and discuss the campaign for defeating the Islamic State extremists, his office said Wednesday.

The Arizona Republican’s visit to the war-torn country occurred as a major battle nears to oust the militants from Raqqa, the capital of the Islamic State’s self-declared caliphate. A statement from the senator’s office did not give the dates of his travel, saying only that he made the visit last week.

“Senator McCain’s visit was a valuable opportunity to assess dynamic conditions on the ground in Syria and Iraq,” the statement reads. It says the president “has rightly ordered a review of U.S. strategy and plans to defeat” the Islamic State group and McCain looks forward to working with the administration and military leaders “to optimize our approach.”

McCain, the chairman of the Senate Armed Services Committee, has voiced escalating concerns with Trump. He recently declared his administration in disarray and expressed concern over how national security decisions are being handled. During a speech Friday at the Munich Security Conference, McCain delivered a withering critique of Trump’s worldview as he lamented a shift in the U.S. and Europe away from the “universal values” that forged the Western alliance 70 years ago.

McCain also quietly traveled to Syria in 2013 to meet with rebels fighting President Bashar Assad’s forces. That visit took place amid meetings in Paris involving efforts to secure participation of Syria’s fractured opposition in an international peace conference in Geneva.

It’s unusual, however, for members of Congress to visit Syria, which has no diplomatic relations with the United States. Rep. Tulsi Gabbard, D-Hawaii, generated a backlash when she visited Syria in January and met with Assad. Gabbard, a member of the House Armed Services Committee, is an outspoken opponent of what she’s called “our counterproductive regime change war” in Syria.

But Rep. Adam Kinzinger, R-Ill., an Air Force veteran who served in Iraq and Afghanistan, said Gabbard gave Assad credibility by meeting with him.

Lawmakers have accused the Assad government of war crimes and even genocide as the number of people killed during the violence in Syria continues to mount. The war, now in its sixth year, has killed hundreds of thousands of people, contributed to Europe’s worst refugee crisis since World War II and given the Islamic State group room to grow into a global terror threat.

Contact Richard Lardner on Twitter: http://twitter.com/rplardner
Copyright 2017 The Associated Press. All rights reserved. This material may not be published, broadcast, rewritten or redistributed.