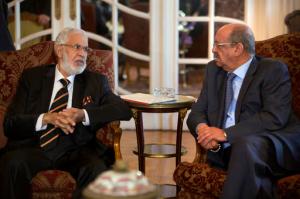 The summit was announced in Tunis after a new round of diplomatic efforts for Libya, where two rival administrations are jockeying for power and where the Islamic State group and other extremists have prospered amid the political vacuum. Libya’s neighbors are highly concerned about spillover of extremist violence.

Diplomats meeting in Tunis released a statement declaring their “attachment to Libya’s sovereignty and territorial integrity,” arguing against foreign intervention or any military solution to Libya’s crisis.

U.S. warplanes have conducted airstrikes on suspected extremists in Libya, which hasn’t emerged from chaos since the killing of Muammar Gadhafi in a 2011 uprising and ensuing civil war.

Libya’s most powerful army commander, Khalifa Hifter, is expected in Tunis in the coming days, according to Tunisia’s foreign minister Khemaies Jihnaoui. Jihnaoui met with the Egyptian foreign minister and Algeria’s African and Arab affairs minister Sunday and Monday in Tunis.

A new health scare Monday for Algeria’s leader threw a shadow over the upcoming summit, planned in Algiers. The Algerian leader canceled a visit by German Chancellor Angela Merkel at the last minute because of what his office called acute bronchitis, raising new concerns about his health after a 2013 stroke.