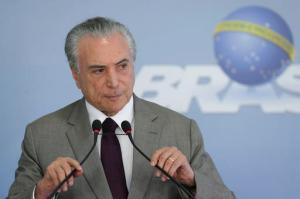 Brazil’s President Michel Temer adjusts his microphones during a press conference at the Planalto Presidential Palace, in Brasilia, Brazil, Monday, Feb. 13, 2017, where he spoke on the security vacuum created by a “police halt” in the Brazilian state Espirito Santo. Temer called the police halt “an insurgency against the Constitution.” Authorities have threatened to prosecute officers who do not respond to the calls to return to duty. The Brazilian Constitution prohibits police from going on strike. (AP Photo/Eraldo Peres)

“This is pre-emptive,” Jungmann said, adding that security in the state was firmly under control and resources were sufficient. “We have protests here, but that has not stopped police from working.”

The soldiers are to help out amid police officers’ strike threats and riots led by anarchists during state legislature votes on austerity measures as the annual Carnaval celebrations take off. Local police officers’ salaries have been delayed amid financial troubles.

The deployment of soldiers across Rio state could be extended for additional days if necessary, Jungmann said.

The move comes on the heels of a widespread protest by the relatives that military police officers said kept them from patrolling for a week and sparked a crime wave in neighboring Espirito Santo state.

Authorities there opened disciplinary proceedings Tuesday against dozens of officers.

Temer has called the halt in Espirito Santo “an insurgency against the Constitution.”

Because military police play a key role in providing security in Brazil, they are not allowed to strike.

Authorities insist the officers were behind the protests and were effectively holding an illegal strike.

Several hundred military police have now returned to duty in Espirito Santo. Federal troops, called in at the height of the crisis, continue to help patrol.