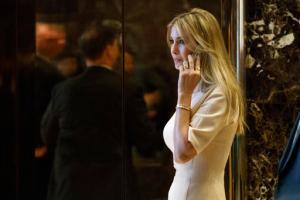 President Donald Trump is asserting that had the right to enact his travel ban.

He tells a group of police chiefs that his immigration order was “done for the security of our nation.” He says the order was written “beautifully” and was within his executive authority.

Trump says “a bad high school student would understand this.”

A federal judge has put the ban on hold, and an appeals court is considering an appeal from the Trump administration. The order includes a temporary travel ban on travelers from seven Muslim-majority countries.

While awaiting a decision, Trump says “courts seem to be so political.”

President Donald Trump is expected to have lunch Thursday with a group of moderate Senate Democrats who could play a key role in his legislative agenda.

The lunch is expected to include Sens. Joe Manchin of West Virginia, Heidi Heitkamp of North Dakota, Joe Donnelly of Indiana and Jon Tester of Montana.

Trump faces a narrow Republican majority in the Senate and hopes to secure some support among Democrats for his agenda and the confirmation of Supreme Court nominee Judge Neil Gorsuch. All four Senate Democrats face re-election in 2018.

The lunch was first reported by USA Today and confirmed by the Senate offices. The White House did not immediately provide details on the lunch, which is also expected to include Republican lawmakers.

President Donald Trump is tweeting that if he loses the pending court case over his travel ban, the country “can never have the security and safety to which we are entitled.”

The 9th U.S. Circuit Court of Appeals is weighing the appeal of Trump’s executive order on immigration, including a temporary travel ban on those from seven Muslim-majority countries. The appeals court challenged the administration’s claim that the ban was motivated by terrorism fears, but it also questioned an attorney’s argument that it unconstitutionally targeted Muslims.

The president tweeted early Wednesday, “If the U.S. does not win this case as it so obviously should, we can never have the security and safety to which we are entitled. Politics!”
Copyright 2017 The Associated Press. All rights reserved. This material may not be published, broadcast, rewritten or redistributed.