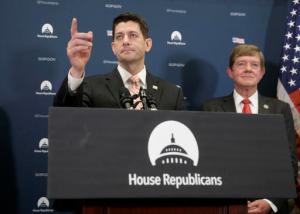 WASHINGTON (AP) — Congressional Republicans are moving to dismantle former President Barack Obama’s rules on the environment, gun ownership and financial disclosure as they look to reverse years of what they see as excessive government regulation during the Democrat’s presidency.

House Republicans are expected to vote Wednesday, Feb. 2, to scuttle a new regulation that prevents coal mining debris from being dumped into nearby streams. Lawmakers also are set to rescind a rule requiring companies to disclose payments made to foreign governments relating to mining and drilling.

Rules on fracking, guns and federal contracting also are in the GOP cross-hairs as Congress moves to void a host of regulations finalized during Obama’s last months in office.

Republicans intend to repeal the rules using the Congressional Review Act, an obscure oversight tool that could become more familiar in the coming weeks as Congress uses it to overturn regulations federal agencies issued late in Obama’s presidency.

The law hastens the process for bringing legislation to the floor and removes the hurdle of a 60-vote threshold. Regulations imposed since June 13 can be invalidated on a simple majority vote of both GOP-led chambers and the president’s signature.

What’s more, the law prevents the executive branch from imposing substantially similar regulations in the future.

It is that aspect of the law that frightens environmental groups that have fought for years for the coal-mining rule and another rule to restrict energy companies from burning off natural gas during drilling operations on public lands.

Using the review act to overturn a federal regulation “is like burning down your house because you don’t like the paint color,” said Jenifer Collins, a clean water advocate for the environmental group Earthjustice.

Collins calls the review act “an extreme and blunt instrument” that essentially prevents federal rule-makers from addressing a topic once Congress has acted.

But House Speaker Paul Ryan and other Republicans blame Obama, saying the rules Congress is rescinding are poorly crafted and hurt people.

“The Department of Interior’s own reports show that mines are safe and the surrounding environment is well-protected,” Ryan said, adding that the stream-protection rule ignores dozens of federal, state and local regulations already in place.

The Interior Department said in announcing the rule in December that it would protect 6,000 miles of streams and 52,000 acres of forests, preventing coal mining debris from being dumped into nearby waters. The rule maintains a long-established 100-foot buffer zone that blocks coal mining near streams, but imposes stricter guidelines for exceptions to the 100-foot rule.

Interior officials said the rule would cause only modest job losses in coal country and could even create jobs as companies hire construction crews to haul and store debris.

Repealing the stream protection rule “is going to sicken and kill the very people Donald Trump falsely promised to help,” coal miners in West Virginia and other states, Grijalva said.

Congress has successfully used the 2-decade-old review act only once before — when President George W. Bush signed a law negating a rule on ergonomic standards enacted during President Bill Clinton’s final months in office.
Copyright 2017 The Associated Press. All rights reserved. This material may not be published, broadcast, rewritten or redistributed.