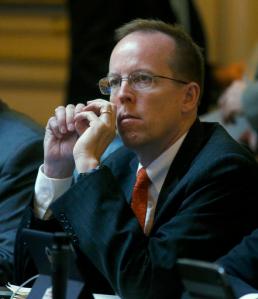 Del. Robert B. Bell, R-Albemarle, waits to present HB1578, his so-called “Tebow Bill” allowing home-schooers to participate in public interscholatic programs, during the floor session of the Virginia House of Delegates at the State Capitol in Richmond, Va., Monday, Jan. 23, 2017. The bill was passed to third reading on a voice vote. (Bob Brown/Richmond Times-Dispatch via AP)

RICHMOND, Va. (AP) — The Virginia House of Delegates gave tentative approval Monday to a bill that would allow home-schooled students to participate in high school sports.

HB 1578, widely known as the “Tebow Bill” after former University of Florida and NFL quarterback Tim Tebow, would give home-schoolers the ability to participate in high school sports and other interscholastic activities. The bill is on the House calendar for final approval Tuesday.

Sponsored by Del. Rob Bell, R-Charlottesville, the bill is modeled after laws in other states. Bell has perennially introduced the legislation since 2005. In 2015 and 2016, Bell’s bills passed the General Assembly and were sent to Gov. Terry McAuliffe, who vetoed them.

Bell described his bill as a “chance to try out” the idea. If passed, the law would “sunset” on July 1, 2022, thus requiring the General Assembly to revisit the issue in five years.

Under the proposal, local school boards would get to decide whether to allow home-schoolers to participate in their school’s athletic programs. School districts would not be required to do so.

In addition, Bell said his bill contains several provisions that would prevent it from being abused to circumvent academic ineligibility.

First, students would be required to play for the school in their home district; they could not choose where to play.

Students who want to participate in their local school’s athletics would be required to pass standardized tests and other requirements for at least two consecutive years. They also would have to meet all immunization requirements necessary to play high school sports.

Schools would be allowed to charge students “reasonable fees” to cover the costs of participation, thereby easing the burden on taxpayers, Bell said.

The issue rose to national prominence in 2007 when ESPN’s “Outside the Lines” featured Tebow and several other home-schooled students across the country seeking access to high school athletics.

Thanks to legislation passed in his home state in 1996, Tebow was allowed to play football at Jacksonville’s Trinity Christian Academy and, later, at nearby Allen D. Nease High School, where he was eventually named a high school All-American.

Since then, Tebow and former NFL defensive end Jason Taylor, who also played high school football while being home-schooled in Pennsylvania, have campaigned across the country to advocate for laws to allowing home-schoolers to play for their local high schools.

In 2008, Tebow received the Quaqua Protege Award as an “outstanding home-education graduate” for his work.

Copyright 2017 The Associated Press. All rights reserved. This material may not be published, broadcast, rewritten or redistributed.