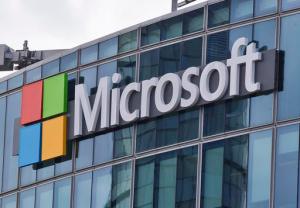 FILE – This April 12, 2016 file photo shows the Microsoft logo in Issy-les-Moulineaux, outside Paris, France. The Justice Department is asking a federal judge to throw out a lawsuit filed by Microsoft that seeks to quash a law allowing the government to demand customer data stored electronically while prohibiting Microsoft from exposing the requests. A justice department lawyer told a federal judge Monday, Jan. 23, 2017, that the government has an interest in keeping criminal investigations confidential. He said Microsoft doesn’t have the standing to argue for the Fourth Amendment rights for its customers. (AP Photo/Michel Euler, File)

SEATTLE (AP) — The U.S. Justice Department asked a judge Monday, Jan. 23, 2017 to throw out a lawsuit from Microsoft and keep a law that prohibits technology companies from telling customers when the government demands their electronic data.

Microsoft says its customers have a constitutional right to know when the government collects their private information during criminal investigations. The Electronic Communications Privacy Act compels companies to divulge the data and keep the move secret, violating the company’s First Amendment right to speak with its customers, according to its complaint filed last year.

“People need to get notice when the government comes knocking at the door to seize all that stuff that historically would have been stored in a file cabinet,” Microsoft lawyer Stephen Rummage told U.S. District Judge James Robart.

Companies including Apple, Twitter and Amazon as well as media outlets such as The Associated Press, the Seattle Times and Washington Post filed court briefs supporting Microsoft.

In its filing, Apple said it received more than 1,000 secret warrants from law enforcement agencies for iCloud data during the last six months of 2015. Microsoft said the government made 2,576 demands for data over an 18-month period before April 2016, the most recent numbers available, and about 68 percent of those had no end date.

Eric Soskin, a Justice Department lawyer, said the federal government has an interest in keeping criminal investigations confidential and customers often eventually learn about the data demands when charges are filed.

Jennie Kneedler, another government lawyer, told the judge that Microsoft does not have the legal standing to argue for its customers’ Fourth Amendment rights, which protect against unreasonable searches and seizures. Only the customers can challenge perceived violations of those rights, she said.

That creates a catch-22, Rummage said. The company is not allowed to tell customers about the warrants, so they can’t file objections.

“Those people can’t protect their rights,” he said.

Judge Robart said he would issue a ruling later but that the law troubled him for several reasons.

“I’m disturbed by the idea that you can have an invasion of rights or privacy without ever disclosing it,” he said. “Microsoft customers have a reasonable expectation of privacy in the content they have stored.”

Historically, people would keep their confidential information, such as health and tax records and love letters, in file cabinets or storage lockers, said Rummage, the Microsoft attorney. If the government secured a warrant to collect that information, the person would know, he said.

But now that data is stored on the cloud online, the government is targeting the tech companies that control that information, Rummage said. But the gag order in the law keeps the process unfairly secret.

Soskin, representing the government, said the system has legal protections: Magistrates approve the warrants before they are served.

That process lacks balance, Rummage said, because warrants are written by the government without defendant input, witnesses or debate. The law only requires that the government has “a reason to believe” disclosure could hinder an investigation.

“We’re talking about core, protected Fourth Amendment information that has been protected since the founding,” he said.

Follow Martha Bellisle at https://twitter.com/marthabellisle
Copyright 2017 The Associated Press. All rights reserved. This material may not be published, broadcast, rewritten or redistributed