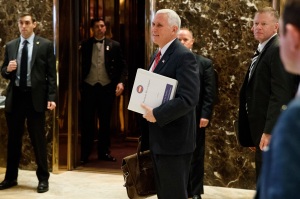 INDIANAPOLIS (AP) — A key aide to Vice President-elect Mike Pence removed himself from the U.S. government’s rolls of federal lobbyists and canceled a lucrative lobbying contract with the state of Indiana days before Donald Trump’s team announced it will ban lobbyists from taking jobs with the administration.

Joshua Pitcock filed the necessary paperwork Nov. 14 and canceled a contract that had paid him $23,000 a month to be the sole Washington lobbyist for Indiana, where Pence has been governor. Two days later, Trump’s transition team announced it will prohibit transition advisers and incoming officials from work as registered federal or state lobbyists.

Pitcock, who has a formal role on Trump’s transition team, did not respond to a message seeking comment. Pence spokesman Matthew Lloyd confirmed Pitcock had canceled his contract with the state.

Pitcock has worked for Pence since he was a member of Congress and served at one point as Pence’s chief of staff. He was hired under contract to be Indiana’s federal lobbyist once Pence took office as Indiana’s governor in 2013 and has been paid a total of nearly $1 million in lobbying feeds since then.

The Associated Press reported earlier this month that during the presidential campaign, Pitcock held a second paid job with the Trump campaign and regularly traveled with Pence to political rallies across the country during working hours. Legal and ethics experts said the unusual arrangement presented ethics concerns and could pose a conflict of interest.

Pitcock and Pence’s gubernatorial administration have said Pitcock was an independent contractor, which made him exempt from ethics rules that apply to rank-and-file state employees. They said his lobbying contract with the state explicitly allowed him to take on work for other clients, including the Trump campaign.

On Monday, another former Pence aide who works as a lobbyist in Indianapolis announced he was opening a new office in Washington. William A. Smith, who worked for Pence when he was in Congress and served as his first chief of staff in the Indiana governor’s office, said his firm Sextons Creek was partnering with lobbying firm Fidelis Government Relations. Smith said he will soon be taking on clients to work on federal and state issues.