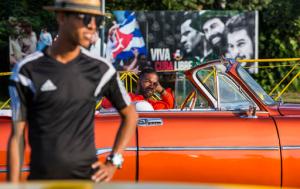 Drivers wait for tourists, in vintage American convertibles at Revolution Square in Havana, Cuba, Sunday, Nov. 27, 2016. Cuba’s government declared nine days of national mourning after Cuban leader Fidel Castro died Friday and this normally vibrant city has been notably subdued. As Cuba prepares a massive commemoration for Castro, tens of thousands of high-season travelers have found themselves accidental witnesses to history and in the middle of a somber city that’s little like its usual exuberant self. (AP Photo/Desmond Boylan)

HAVANA (AP) — They came for salsa music and mojitos and ended up wandering through a city turned still and silent by nine days of national mourning for Fidel Castro.

As Cuba prepares a massive commemoration for the leader of its socialist revolution, tens of thousands of high-season travelers have found themselves accidental witnesses to history — and smack in the middle of a somber city that’s little like its usual exuberant self.

“Who knows what tomorrow or after nine days brings in terms of the country and what happens for the future,” said Graham Palmer, a 36-year-old financial director from London. “And I think we will certainly look back at the airport tomorrow and feel quite privileged that we’ve been here.”

“We picked up the (Communist Party) Granma paper from yesterday, so we’ve got that,” said his companion, 36-year-old marketing worker Emma Taylor.

“I think we could quite even think about framing it,” Palmer interjected. “It’s quite poignant.”

Yet they and other travelers said that in addition to the awe at being present as Cubans honor one of the 20th century’s most influential leaders, there’s a tinge of regret at seeing such a subdued Havana.

Many museums have closed their doors, and a state-sanctioned ban on live music has shuttered concerts and nightspots including the famed Tropicana nightclub. Old Havana these days is eerily devoid of the roving troubadours whose Buena Vista Social Club croonings normally echo through the cobblestone streets. And the 1950s classic cars that function as collective taxis are doing without the usual reggaeton at max volume.

Martin Sawicki, a 34-year-old accountant from Warsaw, Poland, said he was unable to visit the University of Havana or the Revolution Plaza, where Castro’s ashes are to be on display starting Monday. Workers there have already cordoned off access to the towering monument to independence hero Jose Marti.

Meanwhile a citywide ban on most alcohol sales means those savoring Cuban cigars for the first time have to do so without the traditional accompanying snifter of rum.

“They tell us, sorry but we are not serving beer,” said Sawicki. “It’s a little bit annoying because we would like to have a glass of beer in the evening.”

The closures likely affect Cubans even more. Cinemas where it costs just a few cents to take in a flick have been shuttered, along with theaters and dance halls.

Lined up outdoors at the Coppelia ice cream parlor in downtown Havana, conversations were more subdued than the animated tones for which Cubans are famed.

There’s a sense that having a good time right now would be considered disrespectful to the memory of the man who remade Cuba into a socialist state and wholly determined its fortunes from the 1959 revolution until severe illness forced him from power a decade ago.

“We are in mourning because the president died,” said Manuel Ruiz, a 57-year-old parking attendant. “He is a man who deserves respect.”

Amal Easton, a 46-year-old martial arts instructor from Boulder, Colorado, and his travel partner had planned to try to attend a Placido Domingo concert Saturday night until they heard it was canceled. Instead they trekked across the bay for the nightly cannon-firing ceremony that in colonial times signaled the closing of Havana harbor, only to find that it too had been called off.

Easton said he has wanted to come to Cuba his entire life and Castro’s passing has sparked fascinating conversations with Cubans about Castro, the country and their future. But at the same time — from a “purely selfish touristic perspective” — it’s a bit somber. So they decided to cut their time in Havana a day short and head back to their friend’s house in the beach city of Varadero.

“We’ll never forget having been here at this historic moment,” Easton said. “I’ll tell my grandkids I was there in Havana when Fidel died, but then we left early because there’s basically no partying.”

More than 3 million tourists visited Cuba last year, and the government expects even more this season as interest explodes due to detente between Havana and Washington.

On Monday the first commercial flights from the United States to Havana are scheduled to land. But with the national mourning in place through Castro’s Dec. 4 funeral, those passengers will still find relatively little to do other than sightsee and eat.

Palmer and Taylor, the Londoners, spent Sunday roaming the city and checking out its colonial architecture. They jiggled the door of the National Fine Arts Museum in the afternoon, but it was closed. They figured they would head to Revolution Plaza the next day in hopes of seeing the mass tributes to Fidel.

“That could potentially be I guess the profound moment, or kind of one of the highlights of the trip,” Taylor said. “I think if we don’t see any of that, we’ll just feel a bit sad that we’ve not seen the real Havana.”