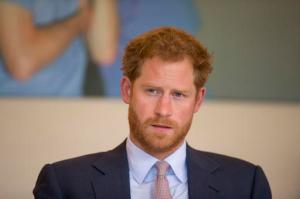 FILE – In this Thursday July 7, 2016 file photo, Britain’s Prince Harry takes part in a round table discussion with HIV doctors at King’s College Hospital in south London as part of his desire to learn more and raise public awareness in the fight against HIV and AIDS both internationally and in the UK. Britain’s Prince Harry has condemned racist abuse and harassment of his girlfriend Meghan Markle in the media, issuing a highly unusual statement Tuesday Nov. 8, 2016, that confirmed the relationship and expressed concern for her safety. (AP Photo/Matt Dunham, Pool, File)

In a highly unusual statement, the prince on Tuesday lashed out at the media for intruding on the privacy of his new girlfriend, American actress Meghan Markle. The 32-year-old royal said the press had crossed a line with articles that had “racial undertones,” and pleaded: “This is not a game.”

The condemnation was the latest in an often uneasy dance between Britain’s royals and an international press hungry for any tidbit about royal scandal or courtship. Both Harry and his brother, Prince William, have spoken candidly about their distrust of the media: Their mother, Princess Diana, died in a 1997 car accident while being pursued by paparazzi, and William’s wife, Kate, was relentlessly scrutinized for years before the couple married in 2011.

Kensington Palace described how journalists tried to break into Markle’s home, how newspapers offered “substantial bribes” to her ex-boyfriend, and said nearly everyone she knows has been bombarded for information. Markle’s mother couldn’t even get to her front door without jostling reporters.

“What is extraordinary about this letter is the level of ethical conduct breaches it details,” said Steven Barnett, a communications professor at the University of Westminster. “You have to feel something for Harry, who is presumably thinking of his mother and what she had to put up with.”

Markle, 35, is best known for her role as a feisty paralegal in the U.S. television drama “Suits.”

Many tabloids alluded to her mixed-race heritage — she has an African-American mother and a white father. One Daily Mail headline described her ancestors as “a tailor, a teacher and a cleaner in racially-divided Jim Crow South.” Another dubbed her a “saucy divorcee.”

The Daily Mirror linked Markle with an online pornography site, saying clips of her from “Suits” featured on the adult site.

Markle has so far not responded, but has in the past written about how she came to terms with being a “biracial woman.”

“While my mixed heritage may have created a gray area surrounding my self-identification, keeping me with a foot on both sides of the fence, I have come to embrace that,” she wrote in an essay for Elle magazine in 2015.

Royal officials said the harassment has “been very public,” citing “the smear on the front page of a national newspaper; the racial undertones of comment pieces; and the outright sexism and racism of social media trolls and web article comments.”

Harry said the commentators will say this is “the price she has to pay” and “this is all part of the game.” But, the palace said, Harry “strongly disagrees.”

“This is not a game — it is her life and his,” the statement said.

Officials had initially declined comment on widespread media speculation that Harry and Markle were dating, as per its usual policy of silence in regard to the personal lives of the royal family. But increasingly the palace has been going on the offensive because the world of blogs and social media can do more reputational damage, and do it more quickly, than traditional media.

“As time goes on, the royal family has sometimes been really puzzled about how to respond to press coverage — should they ignore or seek to engage them?” said James Rodger, a journalism lecturer at City University London. “This is a reflection of an evolving problem, especially with changing social attitudes and media.”

Harry has been linked to a number of women in the past, including another actress, Cressida Bonas. Media intrusion was also seen as having hurt that relationship. In 2012, he spoke of the difficulties of finding a partner willing to take on the responsibilities of being a royal.

Harry said Tuesday’s statement was issued in hopes that the media “can pause and reflect before any further damage is done.” But in confirming his romance with the American actress, the royal also made a very personal relationship public — and there’s no turning back now.

Barnett, at Westminster University, said there wasn’t much the royals could do in the face of a rambunctious press. Despite recent inquiries into media ethics triggered by tabloid phone-hacking allegations, Barnett said British news outlets remain as aggressive as ever.

“All you can do is throw yourself at their mercy,” he said.
Copyright 2016 The Associated Press. All rights reserved. This material may not be published, broadcast, rewritten or redistributed.