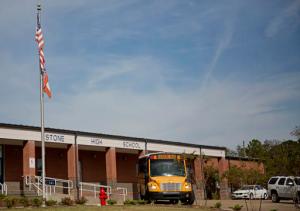 WIGGINS, Miss. (AP) — A south Mississippi high school student has been disciplined following allegations that one or more white students put a noose around the neck of a black football player, a lawyer for the school district said Tuesday.

Administrators determined that Stone High School’s conduct code was violated in the Oct. 13 incident, Sean Courtney, attorney for the Stone County school district, wrote in an email. He added that a student was disciplined after due process in accordance with district policies.

Courtney said he can’t identify the student or the specific punishment, citing privacy rules. However, he denied allegations by Mississippi NAACP President Derrick Johnson that the district hadn’t followed its own procedures. Johnson called Monday for a federal hate-crimes investigation and prosecution of the assailants, all younger than 18, as adults.

“To suggest that the district did not follow its policies and procedures or otherwise not investigate and address this issue is patently false,” Courtney wrote. “This matter has been one that tears at the fabric of our schools and our community and the administration does not intend for it to be swept under the rug or otherwise ignored.”

While sheriff’s deputies are investigating, Courtney says the behavior reported to staff members gave no indication of a crime or criminal intent. John Feaster, football coach at Stone High, has said he kicked a student off the team after finding out what happened. Feaster is the first African American coach in the history of the 800-student school, where about 75 percent of the students are white. Stone High is the only public high school in the 18,000-resident county.

Johnson said he wants the teenagers charged as adults, as Mississippi law allows in some cases for children older between ages 13 and 18. He also suggested bringing in federal prosecutors, such as when young people from Rankin County faced hate crime charges following the 2011 death of a man run down in the parking lot of Jackson motel. Most of them were charged as adults.

“No child should be walking down the hall or in a locker room and be accosted with a noose around their neck,” Johnson said in a Monday news conference. “This is 2016, not 1916. This is America. This is a place where children should go to school and feel safe in their environment.”

Hollis and Stacey Payton, parents of the alleged victim, attended Monday’s news conference but didn’t speak. Their son, a sophomore, wasn’t present. Johnson said the Paytons have received no official word about punishments from school officials. He said school district policy calls for immediate expulsion of students who commit assault.

The NAACP said the incident happened during a break in football practice and that the noose was “yanked backward” while on the student’s neck.

Stone County Sheriff’s Capt. Ray Boggs said Monday that officials believe something close to what the Paytons described did happen and he’s still investigating. He said all the students involved are younger than 17 and he expects any charges would be filed in youth court, where records are closed to the public.

“It’s probably one of the hardest cases I’ll ever handle in my career, because of the nature of it,” said Boggs, who is black. “Have I ever had to deal with something like this? No, not from a high school.”

Johnson said someone from the sheriff’s department advised Stacey Payton not to file a police report because the father of one of the alleged assailants is a former law enforcement officer. Boggs said he’s the one who spoke to Stacey Payton, but said that’s not what he told her. He said he told her pursuing criminal charges could leave hard feelings among students that could make her son’s life harder at school, but he did not try to dissuade her.

The football coach said a player was kicked off the team as soon as school officials determined who was involved. He said he feels “terrible” for the victim, “a tough kid who’s hanging in there.”

“He knows I love him and his teammates love him and the coaching staff loves him and he isn’t going to be treated any differently,” Feaster told the Sun Herald. “He’s one of my favorite kids on this team.”

Carissa Bolden of Wiggins, the mother of a middle school student, attended the NAACP news conference Monday and said white students have been flying the Mississippi flag from their vehicles. The flag includes the Confederate battle emblem — a red field topped by a blue X with 13 white stars. Bolden said she sees a connection between the flag and the noose incident.

“I feel like it escalated from them allowing kids to bring Confederate flags” to school, Bolden said.

Jeff Amy reported from Jackson, Mississippi.
Copyright 2016 The Associated Press. All rights reserved. This material may not be published, broadcast, rewritten or redistributed.