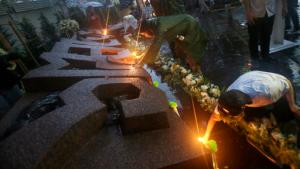 Thai activists lean over the Oct. 6 Memorial to offer lighted candles at Thammasat University in Bangkok, Thailand, Thursday, Oct. 6, 2016. Buddhist monks, mourners, activists and others gathered Thursday to mark the 40th anniversary of one of the darkest days in Thailand’s history, when police killed scores of university students at a peaceful protest, and ghoulish vigilantes defiled the dead. (AP Photo/Sakchai Lalit)

BANGKOK (AP) — Buddhist monks, survivors, mourners and activists gathered Thursday, October 6,2016 to mark the 40th anniversary of one of the darkest days in Thailand’s history, when police killed scores of university students at a peaceful protest, and vigilantes defiled the dead.

Students at Bangkok’s Thammasat University had been protesting the return from exile of a hated former dictator in 1976 when they were trapped by a right-wing mob and heavily armed paramilitary police, who fired guns and grenades at the defenseless crowd of several thousand.

After the students were subdued, thugs rushed in and grabbed as many as a dozen. They were then taken to a nearby public field, beaten to death, hanged and abused, with the bodies tossed onto a makeshift funeral pyre. The official death toll was 46, though credible independent estimates put it at more than 100.

The disorder was used as an excuse for the army to seize power later that day, undoing a student-led democratic revolution three years earlier.

The anniversary comes as Thailand is again under military rule since a 2014 coup, a situation referred to by some speakers at the anniversary ceremony.

“I think we all have heard the term ‘Brexit’ used to describe the process of Britain leaving the EU. I would like to propose that the first necessary condition for democracy in Thailand is ‘Mexit’; meaning the first necessary condition is to take the military out of politics,” said Surachart Bamrungsuk, a former student leader who was present at the Thammasat tragedy and then was held in prison for two years on trumped-up charges.

“If we can’t take the military out of politics, then don’t even think about democracy,” said Surachart, now a professor of political science at Chulalongkorn University in Bangkok.

This year’s commemoration has drawn broader interest than usual because an invited speaker, teenage Hong Kong democracy activist Joshua Wong, was not allowed into the country by Thai authorities, making headlines worldwide. Wong was supposed to speak at Chulalongkorn, which this year joined Thammasat for the first time in marking the anniversary.

The rector of Thammasat, Somkit Lertpaithoon, said the university teaches its students about the violence and even has survivors on its staff.

“Even though the events of Oct. 6 may not be documented in Thai history, the new generation still strives to learn about it,” he said in a speech at the university.

The Thammasat massacre has always been a sensitive issue, both because the images of lynchings speak to a dark side of the Thai character and because the assault on the university showed how the state can carry out human rights abuses with impunity. No perpetrators were ever punished.

An increasing awareness of human rights since 1976 has led to much questioning of the use of state violence, especially because of a sometimes-violent struggle for political power that has troubled Thailand for the past decade, including bloody street battles in Bangkok in 2010.

“The massacre is still of interest 40 years after the fact because it remains officially unresolved. Those who were involved in the violence have not been held to account, even as there has been a wave of transitional justice processes around the world, and even expanded questioning and investigations in relation to the violence of April-May 2010,” Tyrell Haberkorn, a fellow in political and social change at the Australian National University, said earlier this week.

“The incident has relevance to the current state of Thai politics because it becomes possible to continue to stage coup after coup while repressing dissent because those who have done so in the past have not been held to account for doing so,” she said.