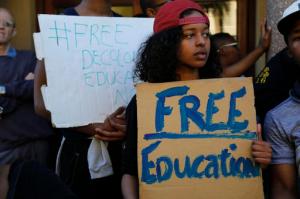 Zuma spoke at a national education forum as the University of Cape Town re-opened despite some disruptions by students who said they won’t stop demonstrating until their demands for free education are met. In Johannesburg, staff returned to the University of the Witwatersrand, which also had been closed because of security concerns, and classes were scheduled to resume on Tuesday.

“What is happening on our campuses at present has the potential to destroy our universities. But we have the power to change that, working together,” said Zuma. He noted a government plan to cover the 2017 fee increases of students who come from households with an annual income of up to $44,000.

Some 75 percent of university students will benefit from that support, which will cost $184 million in state funds, according to Zuma.

Some student protesters have rejected the government plan, saying they are entitled to free education. Bigger demonstrations in 2015 forced the government to suspend university fee increases this year, and protests started again after the government recommended that universities increase fees by no more than 8 percent next year.

The protests forced the closure of several South African universities in the past two weeks. Stone-throwing demonstrators clashed with police firing tear gas and rubber bullets. Some universities warned that classes must resume this week if students are to complete the academic year.

Zuma said police had been directed to arrest “those who are using the genuine grievances of students to commit serious crimes on campuses.”

At the University of Cape Town on Monday, physics lecturer Gregor Leigh said up to 90 percent of students showed up for class, though lectures were disrupted at one point by protesters who entered the building and set off fire alarms, the African News Agency reported.

Two entrances to the University of Cape Town were closed because of the protests Monday morning, the university said on its website.

Follow Christopher Torchia on Twitter at http://www.twitter.com/torchiachris
Copyright 2016 The Associated Press. All rights reserved. This material may not be published, broadcast, rewritten or redistributed.