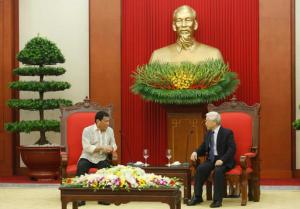 HANOI, Vietnam (AP) — Philippine President Rodrigo Duterte said joint military exercises of Filipino and American troops next week will be the last such drills, although his foreign secretary quickly said the decision was not final.

Duterte made the comments while addressing Filipino community members in Hanoi late Wednesday, Sept. 28, noting that the Philippines will maintain its military alliance with the U.S. because they share a 65-year-old mutual defense treaty.

During a two-day visit to Vietnam, Duterte said he wants to establish new trade and commercial alliances with China and Russia, and that Beijing doesn’t want the war games.

“I would serve notice to you now that this will be the last military exercise,” he said. “Jointly, Philippines-U.S., the last one.”

State Department spokesman John Kirby said Wednesday said they have not received any official communication from the Philippine government on the matter.

Some 1,400 U.S. troops based in Okinawa, Japan and 500 Filipino counterparts plan to participate in the Philippines Amphibious Landing Exercise Oct. 4 to 12 in multiple locations, including Palawan, the westernmost province nearest to disputed islands in the South China Sea, officials said.

The two militaries have routinely held bilateral exercises aimed at improving cooperation between the forces. Cancellation would end the annual 10-day Balikatan, or shoulder to shoulder, exercise which this year drew more than 8,000 troops, among others.

Philippine Secretary of Foreign Affairs Perfecto Yasay Jr., however, contradicted Duterte, saying joint military drills approved by the previous administration will continue until 2017, when they can evaluate whether there’s a need for them to go on.

“He was just simply saying for now, taking into account the political reality, he does not want the joint military exercises to continue,” Yasay said.

Duterte has had an uneasy relationship with the U.S., his country’s long-standing ally and former colonial power, since he won a presidential election in May.

More than 3,000 suspected drug pushers and users have been killed since July 1 under Duterte’s war on drugs. Human rights advocates and Philippine allies including the United States have deplored the killings.

Earlier this month a defiant Duterte cursed President Barack Obama, and said he would not allow joint patrols of disputed waters near the South China Sea with foreign powers, apparently scrapping a deal his predecessor reached with the U.S. military.

Duterte has also said he is considering acquiring military equipment from Russia and China.

Yasay said the Philippines is pursuing an independent foreign policy that serves its national interests. This would involve strengthening relations with China while not alienating traditional friendships with the U.S. and other allies, he said.

On Wednesday, Duterte also said he’s not inclined to go to war, or see Filipino soldiers massacred, in trying to enforce an international tribunal’s ruling in July that supported his country’s claims that China is overreaching in its territorial claims the South China Sea.

There will be “a time of reckoning,” Duterte said, and when that time comes he said he would tell China: “This is ours. I will talk to you but I will not go out of the four corners of this (arbitration) paper.”

Former Philippines Foreign Secretary Albert del Rosario, who spearheaded the case, questioned Duterte’s foreign policy, saying it should not be a “zero-sum game.”

He also warned the Philippines stands to lose billions of dollars in development assistance, including $140 million in foreign military financing from the U.S. for 2016, if the country is seen as violating human rights — a U.S. Congress conditionality in approving such funds.

This story has been corrected to show that the foreign secretary said previously approved drills will continue until 2017, not 2018.