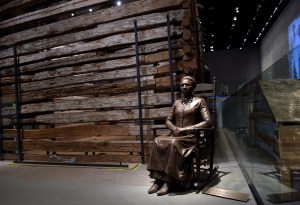 A statue of pioneer Clara Brown, who was born a slave in Virginia around 1800, is on display at the National Museum of African American History and Culture in Washington, Wednesday, Sept. 14, 2016. Brown travelled to Colorado, after she was freed when her slaveowner died in 1856, where she established a successful laundry business. (AP Photo/Susan Walsh)

WASHINGTON (AP) — The Latest on the U.S. presidential election campaign (all times EDT):

President Barack Obama says it would good for Donald Trump to visit the Smithsonian Institution’s new National Museum of African American History and Culture that is opening this weekend.

Obama was disputing the Republican presidential candidate’s assertion that “African-American communities are absolutely in the worst shape that they have ever been in before.”

When asked what advice he would give Hillary Clinton ahead of Monday’s debate with Trump, Obama said she should be herself and explain what motivates her.

He said: “She’s in this for the right reasons.”

Hillary Clinton’s campaign is releasing a new television ad that rehashes some of Donald Trump’s most provocative statements about women in the past.

The 30-second ad shows young girls and women looking in the mirror as they hear Trump describe various women as “fat,” a “slob” and one who “ate like a pig.”

It ends with the tag line: “Is this the president we want for our daughters?” It’s the latest attempt by her campaign to use Trump’s words against him and is similar to ads aimed at voters in battleground states, including veterans and people with disabilities.

Republican presidential candidate Donald Trump is seeking to show law-and-order toughness along with empathy for African-Americans as he criticizes violent protests stemming from another fatal police shooting of a black man.

His Democratic opponent, Hillary Clinton, was behind closed doors as she prepared for their initial debate and did not address on Thursday the escalating racial tensions in Charlotte, North Carolina. The city was under a midnight curfew after two previous nights of chaotic protests that led to one death as well as injuries, arrests and vandalism.

Trump has spent the last several weeks asking black Americans for their support and asserting that President Barack Obama has failed the black community, but those appeals have been undermined at times. On Thursday, the Trump campaign accepted the resignation of an Ohio volunteer, Mahoning County chair Kathy Miller, who told the Guardian newspaper, “I don’t think there was any racism until Obama got elected.”