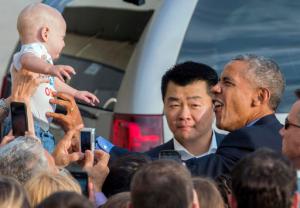 NEW YORK (AP) — President Barack Obama and Iraqi Prime Minister Haider al-Abadi will strategize about the upcoming offensive to take back the northern city of Mosul when they meet on the sidelines of the U.N. General Assembly.

Increasingly, and not without irony, Iraq has become the bright spot in Obama’s campaign against the Islamic State group, though profound challenges remain. In neighboring Syria, the chaotic civil war continues to plague efforts to defeat IS extremists, but in Iraq, cooperation with Abadi’s forces has helped the U.S.-led coalition wrest back half the territory that IS once held, according to the U.S.

Yet a key city remains under IS control: Mosul, Iraq’s second-largest city and the extremist group’s stronghold in the country. An intensely difficult urban fight to oust IS from Mosul is expected to ramp up in the next two to three months, following recent victories in reclaiming other Iraqi cities including Fallujah and Ramadi.

Some 1 million people could be displaced by the battle in Mosul, U.S. and U.N. officials say. Washington considers the Iraqi government’s handling of the displacement to be a major test case for reconciliation in Iraq, given the blend of sectarian groups with an interest in the northern city’s future.

“We’ve always believed that progress on the battlefield needs to be accompanied by continued political progress among Iraq’s different communities,” Ben Rhodes, Obama’s deputy national security adviser, said ahead of the meeting scheduled for Monday.

He said that Obama and Abadi planned to discuss preparation for an “effective and sustainable campaign to liberate Mosul.”

The session comes at a critical time for Obama, who has just a few months left in office to make progress against IS before passing on the conflict to his successor. The Obama administration considers Abadi to be a major improvement over the sectarian approach of his predecessor, Nouri al-Maliki, though Abadi has faced serious domestic political challenges in recent months.

Obama’s meeting with the Iraqi leader marks the start of a hectic week of diplomacy as he makes his final appearance as president at the annual U.N. gathering.

Obama also planned to meet Monday with Chinese Premier Li Keqiang and socialize with U.S. diplomats who work at the U.N. He was also to raise money in private for Senate Democrats, a day after holding another fundraiser for Hillary Clinton. The Democratic presidential nominee was holding her own program of meetings with foreign leaders attending the U.N. summit as she works to portray herself as more presidential than Republican Donald Trump.

On Tuesday, Obama will give his farewell speech to the General Assembly, meet with Nigerian President Muhammadu Buhari, and co-host a summit on the refugee crisis stemming largely from the Syria conflict. The U.S. has told invited countries they must show up with significant commitments in hand to resettle and support more refugees.

Obama planned to take part Wednesday in a U.S.-Africa forum and meet with Colombian President Juan Manuel Santos before returning to Washington.