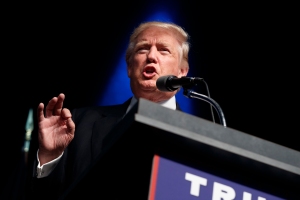 WASHINGTON (AP) — A war of words over Donald Trump’s “deplorables” is intensifying as Republicans and Democrats fight for political points over Hillary Clinton’s claim that many of the New York billionaire’s supporters are racist, sexist and homophobic.

Trump and his allies across the country insisted Tuesday that the Democratic presidential nominee’s comments reflect an out-of-touch elitist who looks down on working-class voters, akin to 2012 GOP nominee Mitt Romney’s assertion that 47 percent of Americans would never vote for him because they were dependent on the government. Democrats — and even some Republicans — warned, however, that this debate could backfire on Trump, drawing new attention to white supremacists and hate groups attracted by his “America first” message.

Indeed, former KKK leader David Duke offered fresh praise for the way that Trump and running mate Mike Pence are handling the controversy. But not all Republicans were pleased.

“Let’s remember that, weird as it may seem, a lot of voters are only just now tuning in, so they may not be aware of the fact that David Duke, various KKK organizations, the alt-right en masse, Vladimir Putin and other foreign authoritarian enemies of America — people who really are deplorable — are supporting Trump,” said Liz Mair, a Washington-based Republican operative and a vocal Trump critic.

Speaking to donors in New York City on Friday, Clinton said half of Trump’s supporters were in “a basket of deplorables,” a crowd she described as racist, sexist, homophobic or xenophobic. Clinton later said she regretted applying that description to “half” of Trump’s backers, but stuck by her assertion that the GOP nominee has given a platform to “hateful views and voices.”

Trump and his team seized on the comments as his supporters across the country embraced a new rallying cry.

“While my opponent slanders you as deplorable and irredeemable, I call you hardworking American patriots,” Trump declared at a Clive, Iowa, rally.

In the crowd, one Trump supporter held a sign that read: “I’m not ‘deplorable.’ I’m just a hard-working, tax-paying American and proud of it!” Another wore a homemade shirt that read, “I’m with deplorable.”

“It sums up what she thinks of American voters: that we’re dumb and stupid and can’t make decisions for ourselves,” said Charles House, 78, of Ankeny, Iowa. “She looks down on us.”

The night before at a rally in North Carolina, one Trump supporter’s violent outburst complicated his message.

As security escorted out several protesters, a man grabbed one protester around the neck, punched another in the face and slapped at another woman. The incident was captured by assembled television networks.

Indiana Gov. Pence, Trump’s vice presidential running mate, refused anew Tuesday to say whether white supremacist Duke was “deplorable.” Pence has disavowed Duke, but said he was “not in the name-calling business.”

Duke, who is running for a U.S. Senate seat from Louisiana, was pleased with that. “The whole idea that they were trying to make Pence call me names, basically, and he didn’t bite on that was a real positive thing for all of us,” Duke said on his daily podcast.

Democrats have welcomed a debate that shines new light on some of the elements cheering Trump’s candidacy.

In November, Clinton will need a strong turnout among President Barack Obama’s coalition of minorities, women and millennials. Her campaign argues that Trump will struggle to connect with such voters if he’s viewed as fostering white supremacists.

“Bigotry is deplorable and I think she should stand by her guns,” said Sen. Sheldon Whitehouse, D-R.I., a Clinton ally.

“His attacks on women and Muslims and immigrants, I mean literally you’d run out of ink writing them all,” McAuliffe said.

A pro-Clinton group, Priorities USA, began airing a new ad this week highlighting some of Trump’s more provocative comments, including his aggressive references to protesters, such as, “I’d like to punch him in the face.”

The GOP nominee and his campaign said Clinton’s comment plays into the idea that she is a sheltered elitist, who sees herself as better than regular people and above the law.

Rob Gleason, the chairman of the Pennsylvania Republican Party, said it made sense for Trump’s campaign to take advantage of the issue, quickly cutting an ad and using it as a rallying cry.

“When somebody gifts you an issue, then you go ahead and run with it,” he said. Still, he questioned whether it would have much impact. “I’m not so sure even if anyone understands that,” he said.

“Trump would be wise to take advantage of it,” Williams said of Clinton’s comment, “but he cannot miss an opportunity to criticize people like David Duke who support his candidacy.”

“They are deplorable,” he added, “but the vast majority of Trump’s supporters are not.”

What political news is the world searching for on Google and talking about on Twitter? Find out via AP’s Election Buzz interactive. http://elections.ap.org/buzz

AP writers Jon Lemire in Clive, Iowa, and Ken Thomas and Julie Bykowicz in Washington contributed to this report.