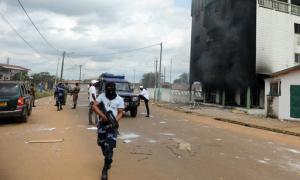 FILE – In this Thursday Sept. 1, 2016 file photo, Gabonese Police stand guard on a barricade following an election protest in Libreville, Gabon. Post election violence in Gabon has killed between 50 and 100 people, the opposition presidential candidate said Tuesday, Sept. 6, 2016, a toll much higher than the government’s count of three in days of violent demonstrations against the president’s re-election. ( AP Photo/Joel Bouopda, File)

LIBREVILLE, Gabon (AP) — Gabon’s president on Wednesday, Aug. 31, tried to deflect European Union observers’ findings of a voting anomaly in his stronghold province that pushed him over the edge to win re-election, accusing his lead opponent of ballot fraud and a plot to seize power.

The opposition party must legally file any complaints by Thursday, eight days after the announcement of the results.

Bongo lashed back on France’s Europe-1 radio Wednesday, saying “Ping committed fraud” in his home constituency and others with the help of “cyber-criminals.” The president did not elaborate.

Ping, also speaking to Europe-1, dismissed the accusations and called for international help in determining “the truth.” He already has declared himself the rightful winner.

The EU observer commission said Tuesday that in addition to not having full access to all districts within Bongo’s stronghold Haut-Ogooue province, voter turnout there appeared inflated.

According to the electoral commission, the province saw a 99.93 percent turnout, with 95 percent voting in favor of Bongo. The EU noted that would mean only 47 people in the area would not have voted.

Other provinces showed a 48 percent voter turnout on average, the EU said.

“In order to restore the confidence of Gabon, I reiterate my call on the Gabonese authorities to publish the poll results by polling station,” said EU observation chief Mariya Gabriel.

The African Union has offered to help find a solution to the crisis.

It is difficult to independently verify reports of any deaths in the postelection violence, as the internet in Gabon has been shut off since Aug. 31.

Bongo’s re-election would extend a family dynasty in power since the 1960s. He was elected in 2009 after the death of his father, longtime ruler Omar Bongo, and protests followed.

“I am calm,” Bongo said Wednesday. “Chaos will not descend.”