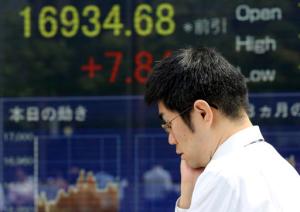 A man walks by an electronic stock board of a securities firm in Tokyo, Friday, Sept. 2, 2016. Most Asian markets were listless Friday as investors awaited key U.S. job data that could influence the Fed’s interest rate policy. (AP Photo/Koji Sasahara)

LONDON (AP) — Stock rose and the dollar fell on Friday after a key report showed the U.S. economy added slightly fewer jobs than expected in August, making it potentially less likely that the Federal Reserve will raise interest rates already this month.

FED EXPECTATIONS: Some analysts were saying before the report that a strong result would make a rate hike from the Fed more likely in September. With the data falling short, that could mean the Fed waits a few more months. That could in theory help stock markets, which are generally boosted by lower rates, though investors will be weighing that against the evidence that the underlying economy is not as strong as hoped.

G-20 WORLD LEADERS: Meanwhile, leaders of the Group of 20 most powerful economies are attending a two-day meeting this weekend, with the global economy expected to be one of the main discussion topics. China, the G-20 meeting’s host, has made trade a major theme of the meeting while other governments also want to tackle climate change, cutting excess capacity in in steel and limits on use of tax havens.

ENERGY: U.S. benchmark crude oil futures rose 61 cents to $43.77 a barrel in electronic trading on the New York Mercantile Exchange. The contract gave up $1.54 on Thursday. Brent crude, the benchmark for international oil prices, added 88 cents to $46.33 a barrel in London.