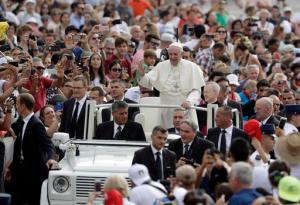 Pope Francis waves to faithful as he is driven through the crowd ahead of his weekly general audience, in St. Peter’s Square, at the Vatican, Wednesday, Aug. 31, 2016. (AP Photo/Andrew Medichini)

VATICAN CITY (AP) — Pope Francis is showing his profound concern for refugees by assuming direct responsibility for migrant issues in a new Vatican department that merges four Vatican offices into one handling peace, the environment and human trafficking issues.

The Vatican issued the statutes Wednesday for the new Vatican dicastery, which puts the pontifical councils for migrants, peace and justice, health workers and charity under one roof. The reorganization is part of Francis’ overall reform of the Vatican bureaucracy to make it more streamlined and responsive to the needs of dioceses.

Francis named Cardinal Peter Turkson to lead the department. The Ghanaian cardinal currently heads the Vatican’s justice and peace office and has been the front man for Francis’ landmark environment encyclical. While Turkson is in charge of the overall office, the Vatican said Francis would personally oversee migrant issues.

Francis has made clear that the refugee crisis facing Europe, the Middle East and the Americas is the priority of his pontificate and has vowed to fight what he calls today’s “globalization of indifference.”

His first trip outside Rome as pope was to the island of Lampedusa, destination for migrants smuggled from Libya. He prayed at the U.S.-Mexico border and said anyone who wants to build a wall there isn’t Christian. And most recently, he brought a dozen Syrian refugees home with him when he visited the hard-hit Greek island of Lesbos to show solidarity with new arrivals.

The new Vatican office, which takes effect Jan. 1, puts the Vatican’s social justice-minded offices together, evidence of Francis’ keen aim to make better known the part of the church’s activities as a “field hospital” for wounded souls. The fact that he also placed “Cor Unum,” the Vatican’s main charity arm, alongside shows that he wants to be able to provide material assistance as well to all those in need.

The new Vatican office marks the fourth major phase of Francis’ overhaul of the Vatican bureaucracy. He has created a new economy ministry to oversee the Vatican’s finances; a communications secretariat to unite the Vatican’s newspaper, radio, television, and press office operations; and an office for Catholic laity that merges previous offices of laity and family.

The new office is likely to be the most high-profile since the issues it deals with — the environment, migration, the sick, prisoners, modern-day slaves — are those closest to Francis’ heart.