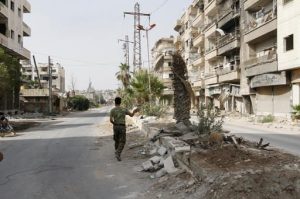 DARAYA, Syria (AP) — Syrian rebels and their families began evacuating a long-besieged Damascus suburb Friday as part of an agreement reached with the government following four years of grueling airstrikes and siege that left the suburb in ruins.

The surrender of Daraya, which became an early symbol of the nascent uprising against President Bashar Assad, marks a success for his government, removing a persistent threat only a few miles from his seat of power. It provides a further boost for the Syrian army as it fights opposition forces for control over Aleppo, Syria’s largest city.

Daraya’s rebels agreed to evacuate in a deal late Thursday. Under the terms of the deal, around 700 gunmen will be allowed safe exit to the opposition-held northern province of Idlib, while some 4,000 civilians will be taken temporarily to a shelter south of Daraya.

The suburb has been besieged and blockaded by government forces, with only one food delivery by the United Nations allowed to reach the district during this time. It has been held by a coalition of ultraconservative Islamic militias, including the Martyrs of Islam Brigade.

As the first white bus with rebels and their families emerged from Daraya, Syrian army soldiers swarmed the vehicle, shouting pro-Assad slogans.

The development comes as U.S. Secretary of State John Kerry arrived in Geneva on Friday for talks with Russian Foreign Minister Sergey Lavrov. The talks center on proposals to share intelligence and coordinate militarily with Russia against the Islamic State group and al-Qaida in Syria and Iraq. Russia and Iran are strong backers of Assad and have been accused of targeting Western-backed rebel forces.

The U.N.’s Syria envoy, Staffan de Mistura, called for the protection of people being evacuated from Daraya and said their departure must be voluntary. In a statement issued in Geneva, he said the U.N. was not consulted or involved in the negotiation of the deal reached between rebel factions and government forces.

Located just southwest of Damascus, Daraya has been pummeled by government airstrikes, barrel bombs and fighting over the years. In August 2012, around 400 people were killed over several days in a killing spree by troops and pro-government militiamen who stormed the suburb after heavy fighting and days of shelling, according to opposition activists.

At least 48 green and white buses, eight ambulances and several Red Crescent and U.N. vehicles were lined up at the entrance of Daraya earlier Friday, waiting for the green light.

An Associated Press journalist who entered the suburb from its northern entrance saw a landscape of severely damaged and deserted buildings, some of them charred. A group of uniformed soldiers celebrated, shouting pro-Syria slogans and flashing victory signs.

Black smoke rose on the horizon — caused by the rebels burning their belongings before evacuating, according to Syrian army soldiers.

Footage posted on the internet by a member of the Daraya local council shows a small group of a few dozen people milling about in a street lined with destroyed buildings. Surrounded by some meager belongings, they appear to be waiting to be evacuated. Women in full face cover are seen sitting on pieces of rubble while bearded men walk about.

Under the deal, the government is to allow safe exit to hundreds of gunmen and their families out of Daraya and let them head to the opposition-held northern province of Idlib. Civilians will be taken to Kesweh, south of Daraya.

“Idlib will be their graveyard,” said a Syrian army soldier. “This is a precious moment for every Syrian,” he added. The soldiers spoke on condition of anonymity in line with regulations.

Daraya, which lies in the western Ghouta region, saw some of the first demonstrations against Assad after the uprising against his family rule began in March 2011, during which residents took to the streets, sometimes pictured carrying red and white roses to reflect the peaceful nature of their protests.

It is the latest rebel-held area to surrender to government troops following years of siege. Opposition activists and human rights groups accuse the government of using siege and starvation tactics to force surrender by the opposition.

The first major truce deal was struck in the Damascus suburb of Moadamiyeh, west of Daraya, in 2014. It was followed by truces and cease-fires in Babila, Yalda, Barzeh around the Syrian capital — all deals that swung heavily in the government’s favor and pacified the region.

Last December, Syrian rebels evacuated the last district they controlled in the central city of Homs, a major symbol of the uprising, after a siege that lasted almost three years. Rebels there also headed to Idlib, handing the government a significant victory in central Syria.

Activist Hussam Ayash said residents were “trying to absorb the shock” of suddenly having to leave. “It’s difficult, but we have no choice,” he told the AP, speaking from inside Daraya.

“Our condition has deteriorated to the point of being unbearable,” he said on Thursday night, ahead of the evacuations. “We withstood for four years but we couldn’t any longer,” he said, choking on his words.

Ayash said the situation became unbearable after the town’s remaining field hospital was bombed and destroyed last week. The government had in recent months also encroached on the town’s agricultural farms — the only source of food for the local population, which he estimated at 8,000 people.