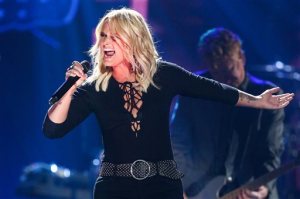 FILE – In a Saturday, April 30, 2016 file photo, Miranda Lambert performs during the 2016 iHeartRadio Country Festival held at Frank Erwin Center, in Austin, Texas. Lambert announced Wednesday, May 25, 2016, that she is closing her Pink Pistol clothing boutique in Tishomingo, Ok., where she and her ex-husband, Blake Shelton, once shared a home. She says Pink Pistol will reopen later this summer in her hometown of Lindale, Texas. (Photo by John Salangsang/Invision/AP, File)

TISHOMINGO, Okla. (AP) — Miranda Lambert is closing her Pink Pistol clothing boutique in the tiny Oklahoma town where she and her ex-husband, Blake Shelton, once shared a home.

The country singer announced Wednesday that Pink Pistol will reopen later this summer in her hometown of Lindale, Texas. Opened in late 2012, the boutique drew tourists and shoppers to Tishomingo, a town of 3,000 residents about 115 miles southeast of Oklahoma City.

Shelton and Lambert divorced last year. Shelton said on Twitter on Wednesday that he bought the building where Pink Pistol is located and that “something is brewing” for the space.

Lambert thanked Pink Pistol’s employees in a statement and said, “Sometimes you need to close a chapter to build on a new beginning or go back home.”