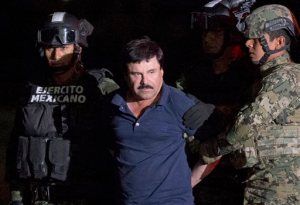 FILE – In this Jan. 8, 2016 file photo, Mexican drug lord Joaquin “El Chapo” Guzman is escorted by army soldiers to a waiting helicopter, at a federal hangar in Mexico City, after he was recaptured from breaking out of a maximum security prison in Mexico. The Spanish-language network Telemundo says it hopes to continue its growth with a non-traditional programming strategy that will include projects based on the story of drug lord El Chapo, the life of Venezuelan leader Hugo Chavez and the late singer Jenni Rivera. (AP Photo/Rebecca Blackwell, File)

NEW YORK (AP) — The Spanish-language network Telemundo says it hopes to continue its growth with a non-traditional programming strategy that will include projects based on the story of drug lord El Chapo, the life of Venezuelan leader Hugo Chavez and the late singer Jenni Rivera.

Telemundo has long been a distant second in the Spanish-language marketplace but is dramatically closing the gap with Univision, primarily because of the leader’s free-fall: Univision’s prime-time average of 2.06 million viewers this season is down 29 percent from the year before, the Nielsen company said.

Telemundo’s viewership is up — 1.43 million this year compared with 1.32 million last year — but the bulk of the Spanish-language audience that Univision has lost is going digital, to other networks or away from TV altogether.

Executives at NBC Universal-owned Telemundo attribute the network’s success to embracing programming forms different from the dominant Spanish-language style of long-running telenovelas. Telemundo is targeting more of a bilingual audience born in the United States, rather than immigrants.

“We have a programming strategy that is dramatically different than the competition,” said Luis Silberwasser, Telemundo network president.

Telemundo is cutting back the length of series’ from the traditional 120-episode telenovelas and continuing some stories across multiple seasons, more like English-language TV. The programs are shooting more on location than simply in studios. Telemundo is also embracing music-oriented programming, like a series based on the life of Mexican singer Rivera, who died in a plane crash in 2012.

“El Chema” is the upcoming series based on El Chapo, only with an actor dramatically younger and more ruggedly handsome than the real-life drug kingpin. A preview shows a prison escape markedly similar to one pulled off by El Chapo.

Historical series include a fictional tale based on late Venezuelan president Hugo Chavez’s life, one about Mexican boxer Julio Cesar Chavez and another on Spanish conquistador Hernan Cortes.

The former “Sabado Gigante” star will host a Sunday night talk show, “Don Francisco Te Invita” (“Don Francisco Invites You”), and is also developing a competition series for children and a game show based on animals.

Competitors at Univision will unveil next year’s programming plans on Tuesday.