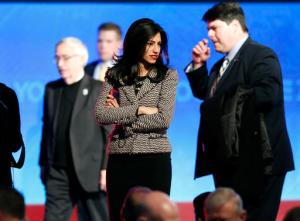 In this photo taken Dec. 19, 2015, Huma Abedin, center, aide to Hillary Clinton, stands on stage after a Democratic presidential primary debate in Manchester, N.H. FBI agents probing whether Hillary Clintons use of a private email server imperiled government secrets appear close to completing their work, a process experts say will likely culminate in a sit-down with the former secretary of state. (AP Photo/Jim Cole)

WASHINGTON (AP) — FBI agents probing whether Hillary Clinton’s use of a private email server imperiled government secrets appear close to completing their work, a process experts say will probably culminate in a sit-down with the former secretary of state.

The FBI has already spoken with Huma Abedin, a Clinton confidant who was among the Democratic presidential front runner’s closest aides at the State Department. Former chief of staff Cheryl D. Mills is also cooperating with the investigation, according to her lawyer.

This signals that agents will probably seek to interview Clinton soon, if they haven’t already, former Justice Department officials told The Associated Press. The FBI’s standard practice is to save questioning the person at the center of an investigation for last, once it has gathered available facts from others.

“With a person like Secretary Clinton, the FBI probably assumes they are going to get one chance to interview her, not only because she is a prominent person but because she is very busy right now with the presidential campaign,” said David Deitch, a former Justice Department prosecutor. “It makes sense they would defer interviewing her until late in their investigation.”

On CBS’s “Face the Nation” on May 8, Clinton said the FBI had not yet reached out to her, but she was “more than ready to talk to anybody, anytime.”

“I hope that this is close to being wrapped up,” she said.

Clinton has good reasons to want the FBI to close its investigation soon. She has been dogged by questions about her email practices for more than a year, since AP revealed that the clintonemail.com server was in the basement of Clinton’s New York home while she served as the nation’s top diplomat from 2009 to 2013.

Clinton has acknowledged in the campaign that her homebrew email setup was a mistake, but said she never sent or received anything marked classified at the time.

FBI Director James Comey said this month he is keeping close tabs on the investigation to ensure that it’s conducted properly and completed promptly. However, he added there is no timeline for completing the probe tied to events on the political calendar, such as the 2016 Democratic National Convention in late July.

Republicans want to keep the issue alive through the November presidential election, alleging that she put national security at risk.

“Clinton’s irresponsible behavior as secretary of state and her deliberate attempts to mislead the American people show she lacks the judgment and character to be president,” Republican National Committee Chairman Reince Priebus said this month.

In addition to the FBI investigation, inspectors general at the State Department and the U.S. intelligence community are reviewing whether security procedures or laws were broken. At least three dozen civil lawsuits have been filed, including one by the AP, over public records requests related to Clinton’s time as secretary.

A federal judge recently approved a request from the conservative legal advocacy group Judicial Watch to question Clinton’s aides under oath in a series of depositions scheduled through the end of June. U.S. District Court Judge Emmet G. Sullivan also said he may require Clinton herself to testify, depending on what information comes to light.

The State Department has so far released more than 52,000 pages of Clinton’s work-related emails, including some that were censored because they contained information considered sensitive to national security. Thousands of additional emails were withheld by Clinton, whose lawyers said they contained personal messages unrelated to her government service.

Critics have questioned whether Clinton’s server might have made a tempting target for hackers, especially those working with or for foreign intelligence services.

A Romanian computer hacker now in U.S. custody, Marcel Lazar, has boasted that he breached Clinton’s home server three years ago. However, Lazar, who went online by the name Guccifer, has provided no evidence to back up his claim. Also, Lazar’s expertise was hacking into the email accounts of politicians and celebrities who used free commercial services, not breaking into a stand-alone email server.

Legal experts have said it appears unlikely Clinton would be charged with committing a crime. The relatively few U.S. laws that govern the handling of classified materials were generally written to cover spies and leakers. Lawyers who specialize in national security say it would be a stretch to apply these statutes to a former cabinet secretary whose communication of sensitive materials was with aides — not a national enemy.

The Justice Department also does not appear to have convened a grand jury to examine Clinton’s email use, a likely step if prosecutors were weighing felony criminal charges.

“You start at the periphery of the circle,” Woo said. By the time investigators move from far-removed witnesses to the person they most want to speak with, “they’re already going to know what’s what, who’s who, who did what, and they’re going to then ask the questions around that,” he said.

But Deitch, now in private practice, stressed that just because investigators may seek to interview Clinton does not necessarily mean she is in legal jeopardy.

“As a defense attorney, I have had many cases where targets of an investigation were interviewed and no indictment was ever forthcoming,” Deitch said. “It’s just part of the process.”