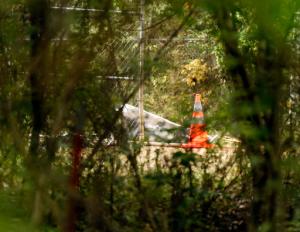 A section of an aircraft is visible through the brush along Colonial Estates Road, near the Tupelo Regional Airport in Tupelo, Miss., Monday morning, May 16, 2016, following an airplane crash. The pilot and three passengers all died when the single-engine plane crashed in a field adjoining the Tupelo Buffalo Park & Zoo. (Thomas Wells/The Northeast Mississippi Daily Journal via AP) MANDATORY CREDIT

TUPELO, Miss. (AP) — A plane that crashed in Mississippi dropped exhaust system parts on a runway as it was taking off, a National Transportation Safety Board investigator said Tuesday, May 16th.

Millicent Hoidal said debris was recovered when the runway at Tupelo Regional Airport was swept after the Monday, May 15th, crash that killed four Texans.

She said the pilot, Henry “Jack” Jackson, radioed the airport’s tower twice seeking to return, reporting smoke in the cockpit. He had been cleared to land when the plane crashed about a half-mile north of the airport. Hoidal said investigators will finish examining the burned debris at the site Tuesday, May 16th and remove it for further examination elsewhere.

Green said she identified the victims by interviewing family members and checking a flight manifest. She said the state crime lab is trying to verify the identity of each body using dental records.

The bodies were badly burned in a fire after the single-engine Beechcraft Bonanza registered to Jackson and Groggel crashed just after takeoff Monday, May 15th. The plane was scheduled to fly to Charlottesville, Virginia.

The FAA and the National Transportation Safety Board are investigating.

Jackson was a professor of information technology at Schreiner University in Kerrville, and Charles Torti had recently retired as a professor of business. The university plans a Thursday, May 26th  prayer service.

“They were good people, good friends and key members of our campus community,” Schreiner President Tim Summerlin said in a statement. “Our hearts go out to their families.”

The Texas Wing of the Civil Air Patrol said Jackson and Groggel had been members of the volunteer group, which flies search-and-rescue and other emergency missions, since 1987. The group said Jackson and Groggel helped found a Civil Air Patrol squadron in Kerrville in the 1990s and worked with a yearly search and rescue exercise in Alpine, Texas. Jackson was a vice commander of the Texas Wing from 2005 to 2015.

This story has been corrected to show that a victim’s last name is spelled Groggel, not Groggell.