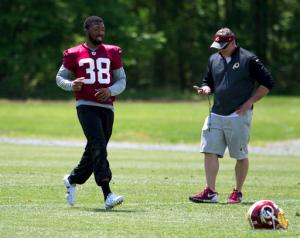 ASHBURN, Va. (AP) — Kendall Fuller knows all about dealing with issues out of his control. The Virginia Tech cornerback went under the knife last fall thinking he’d miss only a few weeks with meniscus repair and found out he’d instead be out months after microfracture surgery on his right knee.

After falling from a projected first-round pick to the third round because of the uncertainty, Fuller is still in wait-and-see mode at the Washington Redskins’ rookie minicamp. He’s at 90 or 95 percent and should be able to get onto the field when OTAs start later this month.

The Redskins are taking the patient approach with Fuller, who they believe can make a difference in his rookie season once healthy.

“He’s doing a good job,” coach Jay Gruden said Saturday after the team’s third rookie minicamp session. “We just want to be a little safer with him and not rush him back. We want to make sure he’s good to go.”

Fuller was last in a game Sept. 19 and has been playing the waiting game ever since. The Baltimore native is anxious to follow brothers Vincent, Corey and Kyle into the NFL, but rushing back doesn’t make any sense.

He’s the only one of the Redskins’ seven draft picks who hasn’t signed a contract yet. But along with his playing status, that’s not something Fuller can worry about too much.

“Definitely stressful,” Fuller said of sitting out rookie minicamp. “You want to get out there, but you’ve just got to be patient with it, control what you can control. My biggest thing right now is just attacking the rehab, attacking my workouts and just getting better every day.”

Gruden said Fuller was “too talented of a player to pass up” with the 84th pick, based on his on-field instincts, college career before the injury, professional blood lines and the coaches he learned from at Virginia Tech. He could be a nickel or dime cornerback right away as part of a rebuilt secondary that also includes Josh Norman.

First, Fuller has to build back some strength in his knee and get into football shape. That process is moving along quickly.

“Being a skill guy, being a guy that’s only about 190, 195 (pounds), it’s not that hard to get in condition,” Fuller said. “Within a week or two, the way they’re working me, it’ll definitely come.”

Fuller couldn’t be on the field at rookie minicamp alongside second-round pick Su’a Cravens, who’s being used at linebacker after playing that and safety at USC. And he can’t test himself against first-round wide receiver Josh Doctson, who’s impressive at first look because of his size.

When sixth-round pick Nate Sudfeld and other quarterbacks missed red zone throws during drills Saturday, Gruden screamed that he’d throw the ball himself if they couldn’t.

“When we have a 6-foot-2½ wideout that has a 40-inch vertical, there’s nothing more that drives me crazy than having it be thrown out of bounds, so I got a little upset,” Gruden said. “We got it right.”

Fuller, who didn’t get to the Redskins’ facility until Wednesday because of final exams, got some light work in and is focused on learning the playbook so when he gets plugged in, he’s ready to go. Virginia Tech playing a similar zone system won’t matter.

“Once I’m 100 percent, the injury is irrelevant,” Fuller said. “So playing zone, man, anything — I’ve just got to go out there and ball.”