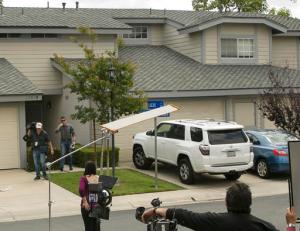 Members of the media stand outside the home of Syed Raheel Farook, the elder brother of San Bernardino gunman Syed Rizwan Farook, after the FBI served a warrant to the location, in Corona, Calif., Thursday, April 28, 2016. Syed Raheel Farook was arrested with two others Thursday in what prosecutors say was a marriage scheme to fraudulently allow one of them to remain in the United States. (AP Photo/Damian Dovarganes)

The accused include Syed Raheel Farook. His brother and sister-in-law, Syed Rizwan Farook and Tashfeen Malik, died in a shootout with police after killing 14 people and wounding 22 others on Dec. 2.

Also arrested were Syed Raheel Farook’s wife, Tatiana, and her sister, Mariya Chernykh. Prosecutors say Mariya’s marriage to Enrique Marquez Jr., the only person charged in the shootings, was a sham designed to enable her to obtain legal status in the U.S. after overstaying a visitor visa in 2009.

Marquez confessed to the scheme when authorities questioned him about the shootings, and he acknowledged getting $200 a month to marry Chernykh, according to his criminal complaint.

The three people all pleaded not guilty at a court hearing Thursday.

A judge ordered that Chernykh, who prosecutors allege was most culpable for the sham marriage, be subject to electronic monitoring. Chernykh said her boyfriend, who is the father of her child, will post her $50,000 bond.

The mother of the Farook brothers posted the $25,000 bond for her oldest son and his wife. He was released, and she was expected to be released within an hour.

“This is about a misrepresentation, an act of marriage,” Raheel Farook’s attorney, Ronald Cordova, told a federal court judge in arguing for his client to be allowed to post bond.

“This is not about terrorism,” he said.

The government may have brought the charges as a bargaining chip in order to get more information that the Farooks and Chernykh haven’t shared, said James Wedick, a former FBI agent who was with the agency 35 years.

“It suggests to me they weren’t talking so the government decided to ask a grand jury to return charges,” Wedick said. “If they were cooperating, they’d probably make some kind of deal.”

While the government can benefit from continued interviews with the trio, Wedick said they also stand to benefit.

According to an indictment unsealed Thursday, Syed Raheel and Tatiana Farook participated in the sham by acting as witnesses to the union of her sister and Marquez, and by creating a joint checking account along with a backdated lease to make it appear as if all four of them lived together.

Tatiana Farook also accompanied her sister to buy a $50 wedding ring, and Marquez and Chernykh posed in photographs that were staged to make the marriage appear real, prosecutors said.

All the while, Marquez was living with his mother next door to the house where the Farook brothers grew up, and Chernykh was living in a different city with her boyfriend, also the father of her child, according to the criminal complaint against Marquez.

Marquez is charged with conspiring to provide material support to terrorists by buying the assault rifles used in the massacre, making false statements about when he bought the weapons, and conspiring with Syed Rizwan Farook on a pair of previously planned attacks that were never carried out.

Syed Raheel Farook, the shooter’s older brother, earned two medals for fighting global terrorism for serving in the Navy from 2003 to 2007. In February, FBI agents spent hours searching his home in the Southern California city of Corona, carting out armloads of thick manila envelopes, a computer tower and an unidentifiable object so heavy it took two men to carry. That search warrant was sealed, and it wasn’t immediately clear if it was connected to Thursday’s arrests.

Syed Rizwan Farook was a county health inspector who targeted his co-workers at an annual training session in what became the deadliest terror strike on U.S. soil since Sept. 11, 2001.

The FBI has not ruled out that someone other than the dead couple knew about or helped plan the attack.

“Those questions are still lingering,” Eimiller said. “Did they have help? Did they have some support of any form? This is very much a continuing investigation and will be for some time.”

Syed Rizwan Farook’s family maintains they had no inkling about the plot. His mother, Rafia Farook, lived with him, Tashfeen Malik, and their newborn daughter in a townhome near San Bernardino. She said she never saw anything to suggest her son and daughter-in-law were planning a massacre.

Malik was from Pakistan and came to the U.S. in July 2014 so she could marry Rizwan Farook, whose parents were born in Pakistan. Farook was born in Chicago and grew up in Southern California.