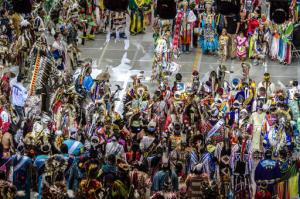 FILE – In this April 25, 2015 file photo, Native American and indigenous dancers surround head man dancer, Juaquin Hamilton, from Shawnee, Okla., following the grand entrance of the 32nd annual Gathering of Nations in Albuquerque N.M. More than 100,000 spectators, artists, and performers will be converging on Albuquerque as part of North America’s largest powwow. The 33rd edition of the three-day festivities get underway Friday, April 29, 2016, at the University of New Mexico basketball arena. (AP Photo/Mark Holm, File)

The 33rd annual Gathering of Nations begins Thursday, April 27, 2016 with the start of the three-day Miss Indian World pageant, one of the best known competitions of its kind in the U.S. Powwow festivities get underway at noon Friday at the University of New Mexico basketball arena, better known as The Pit.

Some 700 Native American tribes in the United States and First Nations in Canada are represented at the gathering, which has become Albuquerque’s second-largest annual festival and brings an estimated $21 million boost to the city’s economy each year, according to the mayor.

Here are some things to know about the gathering’s major highlights.

Nearly all of the powwow’s 3,000 dancers descend onto the arena floor at the start of afternoon and evening dance sessions, starting from the top steps of the University of New Mexico Arena. As dancers enter the arena, onlookers can catch a glimpse of their feathered bustles, buckskin dresses and beaded head and hair pieces — all elements of some of the dancers’ elaborate outfits with detailed, hand-stitched designs.

Most dancers at the Gathering of Nations compete for prize money during the weekend powwow.

Depending on the contestants’ dance style, tribe and region, a woman might don a jingle dress, fancy shawl, or traditional Northern Plains dress that has beadwork or elk’s teeth covering the top portion of the garment. Men can compete in a half-dozen or more dance categories that include traditional dance styles from the Southern and Northern Plains.

Once the dancers reach the bottom of the arena, they spiral clockwise until the dance floor eventually becomes packed, and the crowd moves as one to the music of singers gathered around a drum.

Singers who are members of traditional drum groups from across the country are among the thousands who take part in the gathering, where they stake a spot at the edges of the dance floor for the weekend. Some of the most sought-after and followed groups, including the COZAD singers from Oklahoma and The Boyz from Minnesota, typically travel to the powwow.

Outside the arena, spectators can take in the music of contemporary and traditional artists on Stage 49.

A blues band led by Native American actor Gary Farmer, whose credits include SundanceTV’s “The Red Road” and the 1980s cult film “Powwow Highway,” is among about 30 groups set to take the stage over the weekend.

This three-day pageant crowns a winner on the final night of the powwow — but only after those competing are judged in several contests, including a traditional talent competition that showcases the culture of each woman’s tribe. The current Miss Indian World Cheyenne Brady — whose tribes include Sac and Fox, Cheyenne and Tonkawa — will join in coronating a new winner this weekend.

During the traditional talent competition last year, women gave doll-making demonstrations, sang in their tribal languages, danced and engaged in storytelling. This year, two-dozen contestants hail from as far away as upstate New York, Alaska and Quebec, and as close to Albuquerque as the Mescalero Apache reservation in southern New Mexico.

The prestigious Miss Indian World title comes with a tall, beaded crown. Winners become spokeswomen for the powwow and Native Americans as they travel to events and other powwows throughout the year.

Copyright 2016 The Associated Press. All rights reserved. This material may not be published, broadcast, rewritten or redistributed