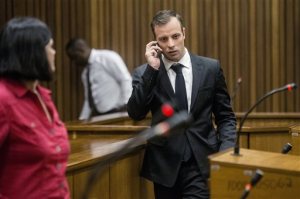 Oscar Pistorius talks on a mobile phone after a hearing at the High Court in Pretoria, South Africa on Monday, April 18, 2016. The South African former Olympic track star Oscar Pistorius appeared briefly in court where a judge scheduled five days in June to determine his sentence for the conviction of murdering his girlfriend. (Marco Longari/Pool Photo via AP)

SOMERSET WEST, South Africa (AP) — The family of Oscar Pistorius has condemned allegations made in a book that new evidence exists to show that he beat girlfriend Reeva Steenkamp with a cricket bat before fatally shooting her at his home in 2013.

The Pistorius family called the allegations “outrageous” and “absurd” in a statement Friday Apr. 22, and said there was an “often-vicious” media trial against the double-amputee Olympian since he was charged with murder in Steenkamp’s killing.

Pistorius appeared in court this week for the first time since his conviction for shooting Steenkamp was upgraded to murder following an appeal by prosecutors. He faces 15 years in prison and will be sentenced in June.

Pistorius’ family also dismissed a British newspaper story that said his uncle had admitted Pistorius murdered Steenkamp, calling it “gutter journalism.”
Copyright 2016 The Associated Press. All rights reserved. This material may not be published, broadcast, rewritten or redistributed.