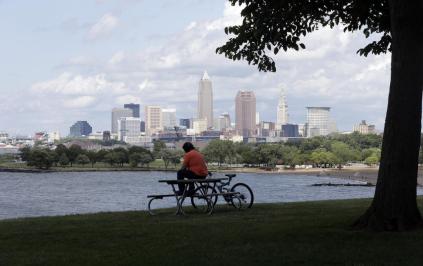 FILE – In this July 8, 2014, file photo, a man sits on a picnic table with a view of downtown Cleveland. Forty-two rules govern the Republican Party and how it picks a presidential candidate. Yet with the nomination potentially up for grabs at July’s GOP convention, one reality prevails: Delegates can change their procedures to help or hurt any candidate they want. (AP Photo/Tony Dejak, File)

WASHINGTON (AP) — Three top Republican Party officials said Thursday, April 14, they believe there’s a consensus that the GOP should not propose rewriting rules about picking a presidential nominee before this summer’s national convention.

Such a move could help shield party leaders from accusations by Donald Trump, other contenders and disgruntled, anti-establishment GOP voters that leading Republicans were conspiring to derail their candidacies.

“Every time you turn around, Trump and other people are criticizing us for wanting to somehow steal the election, which is preposterous,” said Florida GOP committeeman Peter Feaman.

By not making early recommendations for rules changes, all-but-certain battles over how the nominating process will work would be deferred until the party’s delegates gather in Cleveland this July to choose a presidential candidate.

The 2,472 delegates have final say over the convention rules. With a growing possibility that no candidate will be supported by a majority of them, the rival camps are expected to compete to recast the bylaws to their advantage.

Leading GOP presidential candidate Donald Trump, whose campaign has lost some momentum, has complained that the party’s nominating system is “rigged” against him. Trump leads the race for delegates, but some Republicans are openly working against him for fear that he will lose the general election and cost the GOP congressional seats.

Feaman said Thursday that in a recent conference call that included other members of the party’s rules committee, there was a consensus that it was best to leave the current rules alone.

“We want to avoid even the appearance that somehow, the RNC is trying to meddle or manipulate the convention process,” said Feaman, referring to the Republican National Committee.

“There’s a general consensus that you don’t change the rules in the middle of the game,” said Randy Evans, a Georgia RNC committeeman also on the party’s rules committee. “And any changes that might even be appropriate would be viewed through a lens of cynicism, so we’re best off just to continue with the rules that we have.”

RNC Chairman Reince Priebus has said he doesn’t expect the rules to be changed.

The GOP has 42 rules governing the party and the convention, but they are temporary. The party can propose that the delegates change the existing bylaws, but the delegates will decide — in a vote expected the gathering’s first day, July 18 — what the rules will be.

Current bylaws require that to be nominated, a candidate must present petitions from a majority of delegates from at least eight states and territories. Right now, only Trump and Cruz seem likely to reach that threshold — which disadvantages Ohio Gov. John Kasich, who is still running, and other Republicans not currently competing.

Potential rules changes include lowering that eight-state requirement or allowing delegates pledged to support one candidate to sign nominating petitions for another.

“In the current environment and the climate, you don’t have to do much of anything to get untoward attention,” said Curly Haugland, a North Dakota RNC committeeman.

Noting that the delegates will make final decisions anyway, Haugland said, “Why stir things up?”