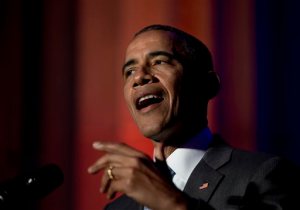 NEW YORK (AP) — President Barack Obama’s turn as a media critic this week may not have thrilled many journalists, but it has forced a new look at how a media-saturated presidential campaign is being covered.

Obama’s challenge to reporters to be more probing comes at a time the media is facing two seemingly contradictory strains of criticism for its treatment of Republican front-runner Donald Trump: that it has covered him too much, or not done enough to look into his background and promises.

Obama, speaking Monday night at a Syracuse University awards ceremony honoring the late political journalist Robin Toner, said he’s not the only one dismayed by the tone of the campaign to succeed him. “I was going to call it a ‘carnival atmosphere,’ but that implies fun,” he said. He said he always believed there was a price to pay if a politician said one thing and did another and wondered “in the current atmosphere, is that still true?”

For reporters, he said “a job well done is about more than just handing someone a microphone.” The billions of dollars in free media should come with “serious accountability, especially when politicians issue unworkable plans or make promises they can’t keep,” he said.

Steve Capus, executive producer of the “CBS Evening News” and a former NBC News president, said Tuesday that he’s wary of politicians who become media critics. Lumping all of the media together is neither fair nor accurate, he said.

“When he calls for holding people accountable and talks about the role of the press in a free society, we would agree,” Capus said. “I kind of think that’s part of our marching orders on a daily basis.”

Obama’s criticism fell flat on MSNBC’s “Morning Joe.” Host Joe Scarborough and Politico founder Jim VandeHei said that while Obama is urging the press to do better, he’s had his own challenges running an open government.

Much of the criticism seems directed at cable news networks, which have been covering the campaign virtually nonstop for the past several months. They’ve been rewarded financially: Fox News Channel reported Tuesday that it will finish the first three months as the top-rated network in all of cable TV, the first such quarterly victory in the network’s history.

CNN’s chief executive Jeff Zucker has refined the strategy of “flooding the zone,” or staying on one big story nearly exclusively while it’s hot, and driven the use of town hall meetings with candidates to feed the political interest. Since the beginning of 2016, CNN has averaged 1.62 million viewers in prime time on weeknights, the Nielsen company said. Last year, CNN had 572,000 viewers during the same period.

None of the cable networks would make executives available to talk about Obama’s remarks.

Networks have broadcast Trump news conferences or rallies in full, something rarely done in the past for candidates. Not only do they draw high ratings, there’s always the potential Trump could say something outrageous or be interrupted by a demonstration.

Still, it’s inaccurate to say reporters haven’t put difficult questions to Trump. Recently, he’s submitted to sharply specific probing by editorial boards at The Washington Post and The New York Times, and his responses have gotten wide coverage. It’s precisely because of reporting that people have learned of the shakiness of some of Trump’s proposals, Capus said.

Trump’s critics overlook the fact that voters in primary and caucus states have put him where he is, he said.

“That’s why he’s the front-runner,” Capus said. “Not because of the media coverage.”

There’s no available accounting of how much time the cable news networks have spent on Trump, but a study of broadcast network evening newscasts illustrates how he has dominated coverage. During the campaign through last Friday, Trump was the focus of 536 minutes of coverage on the ABC, CBS and NBC evening newscasts, according to news consultant Andrew Tyndall.

Hillary Clinton was second with 191 minutes. Ted Cruz had 72 minutes, Bernie Sanders had 67 minutes and John Kasich had six minutes. Tyndall’s accounting does not include specific accounting for primary or caucus coverage.

It’s fair to ask whether the news media has both overhyped Trump and overlooked Sanders’ ascendancy during the same campaign, Hall said.

Hall said, however, that she senses a new seriousness in the Trump coverage since it has become apparent he is the probable Republican nominee. Journalists appear engaged in a mid-campaign evaluation of how their work is being done — even before Obama gave attention to the issue, she said.