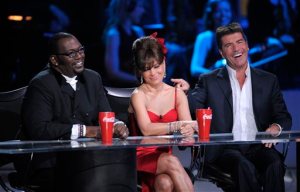 FILE – In this April 6, 2008 file photo, Randy Jackson, left, Paula Abdul, center, and Simon Cowell are seen on stage at the “Idol Gives Back” fundraising special of “American Idol” in Los Angeles. The cultural phenomenon that changed the face of television and created some of todays biggest music stars, will kick off a three-night Grand Finale week on Tuesday, April 5. (AP Photo/Mark J. Terrill, File)

LOS ANGELES (AP) — “American Idol,” which gave the world Kelly Clarkson, Carrie Underwood and Jennifer Hudson, has one more chance to mint a star before it fades into TV and music history.

Whether viewers choose a future chart-topper or trivia question remains to be seen. But executive producer Nigel Lythgoe, who helped translate Britain’s “Pop Idol” into the Fox version that debuted in 2002, said the farewell episode will be memorable.

“It’s going to be a rather spectacular show,” Lythgoe promised, with all the former winners on hand along with past contestants and “other surprises” in the two-hour finale.

“It’s about the American idols, about reminding people of 15 seasons,” he said, as well as giving the final winner his or her share of the spotlight.

The contenders for the title are finalists MacKenzie Bourg, 23, of Lafayette, Louisiana; Trent Harmon, 24, of Amory, Mississippi; La’Porsha Renae, 22, of McComb, Mississippi; and Dalton Rapattoni, 19, of Dallas.

The field will have been trimmed to three for the final competition episode, 8-9 p.m. EDT Wednesday, April 6, with the winner announced the next night, 8-10:06 p.m. EDT Thursday, April 7. Lythgoe, who exited the series in 2013, returned to produce the concluding night’s broadcast.

Clarkson, the inaugural “Idol,” is set to perform, as are Underwood and the other winners including Ruben Studdard, Fantasia, Jordin Sparks and Scotty McCreery. Among the many contestants taking part: Clay Aiken, Chris Daughtry, Katharine McPhee, Kellie Pickler, Elliott Yamin and LaToya London.

Past “Idol” finales became known for flaunting superstars, perhaps none more important than Prince. His performance in the 2006 season-ender signaled that the show had transcended its image as overblown karaoke and become a respectable showcase for established artists.

But Lythgoe downplays the importance of celebrities as part of the finale — or the contest itself.

“It isn’t about big stars coming on and singing their record. ‘American Idol’ was never about that. It was about the young stars we created,” he said.

“I’ve invited them back to the finale to sing ‘That’s What Friends Are For,'” he said.

“I only really associate great memories with being on that show,” he said. While some others are reluctant to credit their careers to “Idol,” he gladly admits it — and so, he points out, does one of the show’s biggest graduates.

“Even to this day, when Carrie Underwood accepts her Grammys and other awards, she says, ‘Thank you, ‘American Idol,’ this wouldn’t be possible,'” Hernandez said. “I’m so thankful just to have fans in the Philippines or in Europe who say, ‘I remember you on that show. I bought your album.'”

“Idol” was as much a boost for Fox as any of its young singers, ruling the TV ratings as the No. 1 series for an astounding nine consecutive years.

Lythgoe said he was confident that British mega-producer Simon Fuller’s “Pop Idol” format, with its unusual behind-the-scenes view of contestant auditions, would export well. And he told Fox executives just that.

“You realize this program is going to take you across the board, from grandchildren to grandparents,” Lythgoe recalled saying. “This was a family show at a time when family members were each disappearing into their own rooms to watch television.”

Although he firmly believed in it, he said, “Simon Cowell packed his suitcase for two weeks.”

While Cowell’s barbed criticism of contestants helped drive the show’s popularity, it also made for a rocky start with Abdul, who favored a more nurturing approach with the show’s young talent.

“Paula couldn’t understand how this English guy next to her could be so rude and ruthless,” he said. “So she was in tears a great deal of the time and terribly upset. Then to see them come together. … Simon, Paula and Randy are the three judges that everybody will remember.”

“It fulfilled so many dreams and encouraged so many people, even if they aren’t singers. There are people who watch the show and are touched by it. I’m sad that it’s going to be gone because of that, because of the lives that it touched.”

Lynn Elber is a national television columnist for The Associated Press. Her work can be found at http://bigstory.ap.org/content/lynn-elber and she can be reached at lelber@ap.org and on Twitter at http://twitter.com/lynnelber