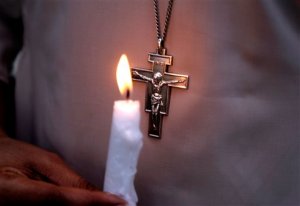 A Pakistani nun holds a candle during a vigil for victims of Sunday’s deadly suicide bombing in a park, Monday, March 28, 2016 in Lahore, Pakistan. Pakistan’s prime minister on Monday vowed to eliminate perpetrators of terror attacks such as the massive suicide bombing that targeted Christians gathered for Easter the previous day in the eastern city of Lahore, killing at least 70 people. (AP Photo/K.M. Chaudary)

ISLAMABAD (AP) — The suicide bombing in the city of Lahore on Easter underscores how Pakistan’s Christian minority has become an easy target for the country’s Islamic militants, although Muslims also were among the victims.

There are barely 2.5 million Christians in the mostly Muslim country of 180 million, and they say they worry about sending their children out and rarely feel safe even in church.

“It is very fearful living in your own country … when you are attacked by fanatics in your own home,” said the Rev. Riaz Arif of Lahore, adding that radical Muslim groups seek revenge for perceived aggression against them by predominantly Christian nations in the West.

A look at the Christian community in Pakistan

For centuries, Christians have been a part of the Asian subcontinent in what is now known as Pakistan. There are famous Pakistani Christians, such as A.R. Cornelius, the first non-Muslim chief justice of Pakistan’s Supreme Court, but also politicians, educators, health care professionals and fighter pilots. But Christians often rank among the country’s poorest people, often working at menial jobs and living in poor, slum-like areas. Some of the Christian population has its roots in the Hindu religion. When Pakistan was carved from a larger India in 1947 and given independence as a homeland for South Asia’s Muslims, many Dalats or lower caste Hindus living in what is today Pakistan, converted to Christianity. While looked upon with suspicion, it worsened for Christians, like many minorities, after dictator Zia-ul Haq, with Western support, nurtured Islamic militancy to fight Soviet forces in Afghanistan. The intolerant views of these militants began to dominate, and minorities became easy targets. In the 1980s and 1990s, Christians sometimes were set upon by mobs of militant Muslims, but it wasn’t until after the 2001 U.S.-led assault on Afghanistan that attacks against Pakistan’s Christians increased both in numbers and ferocity.

NATURE OF THE VIOLENCE

In predominantly Christian neighborhoods, radical Muslims have carried out attacks based on trumped-up charges of blasphemy, which is punishable by death. Christians are routinely accused by radical Muslims of trying to undermine Pakistan as an Islamic state. There have been reports of forced conversions of Christian girls. In January, a girl was killed and two were injured when they refused the advances of three Muslim men, who ran them over upon learning they were Christian. An Islamabad-based think tank, The Jinnah Institute, called the violence “some of the worst mob attacks against minority communities in Pakistan.” Christian neighborhoods in Punjab and Islamabad “have seen mass attacks fueled by hate speech. These attacks have led to widespread destruction of homes and properties,” he said.

Radical Muslim extremist groups that espouse a violent anti-Western philosophy and demand Islamic law throughout Pakistan see Christians as allies of the West and opponents of their interpretation of their faith. While Pakistan’s most violent militant groups are sectarian-based and often attack each other, they will routinely unite against Christians. The alliance of Taliban groups operating in tribal areas known as the Tehrek-e-Taliban Pakistan specifically target Christians. Attacks have increased as Pakistan’s military has stepped up its assault on the Taliban’s tribal hideouts. The Lahore bombing was carried out by a breakaway Taliban group that also said the violence was in retaliation for an army offensive in North Waziristan that began in 2014. Also targeting Christians are groups like the Lashkar-e-Jhangvi, a virulent anti-Shiite group; Jamaat-ud-Dawa, which is also known as the terrorist group Lashkar-e-Taiba; and the Sunni militant group Sipah-e-Sahaba. Many independent local clerics also spread hate over loudspeakers, which the government has sought to curb.

SOME ATTACKS ON CHURCHES, HOMES AND INDIVIDUALS SINCE 2002

— Islamabad, 2002: An American woman and her daughter were killed along with three other people when multiple assailants breached security and attacked a multidenominational church inside the diplomatic enclave where the foreign missions are located.

— Eastern Punjab, 2005: three churches were destroyed, but no deaths were reported.