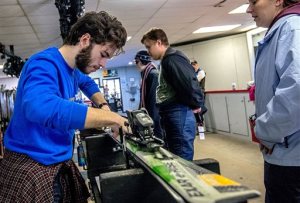 In this Thursday, Jan. 14, 2016, photo, Jake Borg, a rental shop employee at Massanutten Resort, works on some skis for a customer at Massanutten’s rental shop in Massanutten, Va. Great Eastern Resort announced recently that its companies, including the resort, are under full control of an Employee Stock Ownership Program. In addition to Massanutten, its holdings include Peak Construction Co., headquartered at the resort, and Wilderness Presidential Resort, a campground in western Spotsylvania County. (Austin Bachand/Daily News-Record via AP)

HARRISONBURG, Va. (AP) — If a Massanutten Resort staff member has assisted you recently, you weren’t dealing with just any employee. You were helped by one of its owners.

Great Eastern Resort announced recently that its companies, including the resort, are under full control of an Employee Stock Ownership Program. In addition to Massanutten, its holdings include Peak Construction Co., headquartered at the resort, and Wilderness Presidential Resort, a campground in western Spotsylvania County.

Hammer is still the company’s president, according to a press release, and he and Jim Lambert’s son, Jimmy, remain on Great Eastern’s board of directors. No significant operational changes are expected because of the completion of the sale.

Money for the purchase came from profitability and bank loans, Krohn said. He would not divulge the purchase price.

He called the employee acquisition “a momentous event” for Great Eastern but noted that much more has been accomplished since the ESOP was established in 1993.

“Not only did we buy the resort from the owners over 20 years, we also grew the resort tenfold,” Krohn said. “That simultaneous need for funds is exceptional.”

Great Eastern is headquartered in Charlottesville and has about 1,900 employees, Krohn said. Most of the company’s workforce is in Rockingham County; Massanutten employs 1,500 people alone.

Including retirees and former employees, more than 3,000 people participate in the ESOP, he said.

Matthias Smith, vice president and general manager of the 6,000-acre Massanutten Resort, said it was a “great testament” to the owners’ vision and commitment to their employees to establish the ESOP.

The program, Smith explained, is a qualified retirement plan that’s based on employee earnings. It costs them nothing. They become vested in the program based on tenure and can cash out at any time.

The company views the program as a way to attract and retain employees in the high turnover hospitality industry, he said. More than 150 people have been with the company 10 years or more, and more than 60 have at least 20 years of experience.

Employees benefit from having a strong retirement plan that they can contribute to by doing their jobs well. Smith said it encourages workers to “think like an owner” and look for ways to save the company money.

“Our success,” he said, “is their retirement growth.”

Smith, who’s been with the resort for about 15 months, said this is the first time he’s worked for an employee-owned company, and he likes the experience.

Public companies tend to focus on quarterly profits, he said, as do some private businesses. The ESOP has more of a long-term focus.

“We operate from the perspective that the company will be around for a very long time,” Smith said. “The ESOP recognizes that fact and rewards employees for supporting that reality. It’s not only for the company’s growth, but the employees’ reward.”

Employees are encouraged to provide ideas for cost-savings and efficiency.

“Employee engagement is a foundational mission for us,” Smith said. “We believe the best ideas are generated by our owners and guests and our employees.”

Information from: Daily News-Record, http://www.dnronline.com
Copyright 2016 The Associated Press. All rights reserved. This material may not be published, broadcast, rewritten or redistributed.