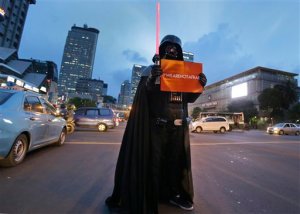 An activist in a Darth Vader costume holds a poster during a rally condemning Thursday’s attack, outside the Starbucks cafe where it took place in Jakarta, Indonesia, Friday, Jan. 15, 2016. Indonesians were shaken but refusing to be cowed a day after a deadly attack in a busy district of central Jakarta that has been claimed by the Islamic State group. (AP Photo/Achmad Ibrahim)

JAKARTA, Indonesia (AP) — An audacious attack by suicide bombers in the heart of Indonesia’s capital was funded by the Islamic State group, police said Friday, Jan. 15, as they seized an IS flag from the home of one of the attackers and carried out raids across the country in which one suspected militant was killed.

National police chief Gen. Badrodin Haiti told reporters that Thursday’s attack was funded by IS through Bahrun Naim, an Indonesian who spent one year in jail for illegal possession of weapons in 2011, and is now in Syria fighting for the group.

Supporters of IS also circulated a claim of responsibility for the attack on Twitter late Thursday. The radical group controls territory in Syria and Iraq, and its ambition to create an Islamic caliphate has attracted some 30,000 foreign fighters from around the world, including a few hundred Indonesians and Malaysians.

The IS link, if proved, poses a challenge to Indonesian security forces. Until now, the group was known only to have sympathizers with no active cells capable of planning and carrying out a plot such as Thursday’s in which five men attacked a Starbucks cafe and a traffic police booth with handmade bombs, guns and suicide belts. They killed two people, one a Canadian and the other an Indonesian, and injured 20 in the first major attack in Indonesia since 2009. The militants were killed, either by their suicide vests or by police.

The attack “was funded by ISIS in Syria through Bahrun Naim,” Haiti told reporters after Friday prayers, using an acronym for the Islamic State group. He did not elaborate.

He also identified one of the five attackers as Sunakim, who in 2010 was sentenced to seven years in jail for his involvement in military-style training in Aceh, but was released early.

Police conducted raids across Indonesia but was it unclear whether those arrested were suspected of links to the bombing or if police were rounding up militants as part of a broader crackdown in its aftermath. They also outlined a partial reconstruction of events based on security camera video, part of which showed a Starbucks customer escaping from the grip of a bomber before he detonated his suicide bomb. Police did not identify the customer but said he or she suffered minor injuries.

National police spokesman Maj. Gen. Anton Charliyan said an IS flag was found in the home of one of the attackers and raids were conducted in Java, Kalimantan and Sulawesi, with four arrests made. Charliyan said three men arrested at dawn in their homes in Depok on the outskirts of Jakarta are no longer suspected of being linked to the attack. On Friday evening, police searched the home of another of the dead bombers whom they identified as Muhammad Ali.

Haiti said a suspected militant was killed in a gunbattle in central Sulawesi, the hiding place of Indonesia’s most wanted Islamic radical, Abu Wardah Santoso, who leads the East Indonesia Mujahidin network that has pledged allegiance to IS. He said the man wasn’t linked to Thursday’s attack.

In recent years, Indonesian counterterrorism forces successfully stamped out the extremist group Jemaah Islamiyah that was responsible for several attacks, including the 2002 bombings of bars in Bali which killed 202 people, as well as two hotel bombings in Jakarta in 2009 that killed seven people. Terrorism experts say IS supporters in Indonesia are drawn from the remnants of Jemaah Islamiyah and other groups.

Jakarta residents remained shaken by Thursday’s events but refused to be cowed.

About 200 people, mostly youngsters with flowers in their hands, gathered in front of the Starbucks in a show of sympathy for the victims and solidarity against extremist violence. They unfurled posters that read, “We are not afraid.”

“Whatever they did, they have killed life,” said Muji Sutrisno, a noted Indonesian intellectual. “Indonesia is a strong state, it will not be provoked by terrorism.”